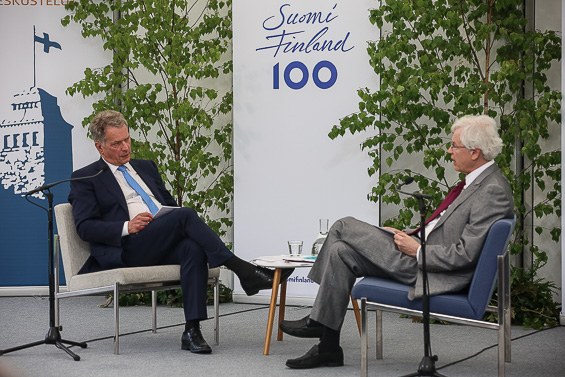 The concluding discussion crystallised the themes explored during the couple of days spent at Kultaranta: the challenges and future of Finland, Europe and the entire world. Will Finland’s success story continue into the future? What kinds of challenges will be set by global politics? How will representative democracy fare?

In the concluding discussion on Monday 12 June 2017, this theme was explored by President of the Republic Sauli Niinistö and Nobel Laureate, Professor Bengt Holmström. In addition, during breaks in the discussion, Mika Maliranta, Mika Aaltola and Karina Jutila presented the ideas of the working groups they had chaired earlier in the day.

President Niinistö and Professor Holmström began by discussing Finland’s success story and its future. President Niinistö pointed out that Finland is among the top countries in terms of factors such as stability. However, challenges lie ahead with respect to the economic outlook.

“We lay people are worried about the transformation of work. Developments in global production, automation, and the arrival of robots are issues of concern,” President Niinistö said.

Professor Holmström views artificial intelligence as an inevitable future development. It will displace jobs on the one hand, but it will also create work.

“The ideal situation is that people do better work with the help of artificial intelligence. That should be the aim. I see a bright future, but the problem is how to get there. The bridge to the future will be built on training and education,” said Holmström.

Holmström also referred to greater labour market flexibility as a key factor in building success. He believes that reforms in areas such as taxation are unavoidable.

The discussion of Finland’s success story interlocked with Finland’s role in Europe and the wider world. President Niinistö raised the issue of the global political power structure: EU and China, which seem to have a well-functioning relationship, and the USA and Russia, which are moving further apart.

“In such a situation, the world would be governed by two bisecting sets of relationships, which is worrying for the rest of us. Phenomena, such as population growth, climate change and migration, are common to the entire world and must be responded to,” commented President Niinistö.

Holmström does not regard the ideas of US President Trump as purely negative. He believes that Trump’s criticism could serve as a wake-up call for Europe.

“Europe has not thought issues through. Why, ultimately, have we joined together in Europe? I have never heard a clear answer to this question. My answer is that the EU was originally founded due to the global economy, to avoid marginalisation,” Holmström suggested.

Representative democracy in a crisis

Both President Niinistö and Professor Holmström had ideas on the future of democracy. President Niinistö referred to Hannibal’s attempt to conquer Rome. In school history lessons, this was described in terms of the civilised, well-organised Romans being given a bloody nose by uncivilised and uneducated barbarians.

“This was difficult for me to understand. I think that this is a history lesson that should provide food for thought for western democracies and civilized states. Are we ready to respond to a totally unexpected and aggressive, undemocratic or dictatorial course of action?” asked President Niinistö.

Professor Holmström also regarded an attack on representative democracy as a key concern, in addition to war. Holmström drew attention to the distrust people have towards their politicians. He views it as worrying that it is now regarded as a merit if someone enters politics from another walk of life.

“Representative democracy is based on the idea that, as a citizen, I trust that decision-makers are privy to information which I have not seen. This is the key distinction: do you blame a person for being a poor leader? Or do you believe that the information they are privy to explains what happened? This is the nature of trust. Trust will not be created by increasing transparency,” Holmström said.

Talks held for the fifth time

Holmström’s remarks inspired a lively discussion amongst the audience of openness and transparency in politics. Many audience members believed that politicians required a range of expertise and that all decisions and agreements must withstand the light of publicity.

“Time is running out, but we have come away with a new term: honest horse trading,” summed up President Niinistö.

President of the Republic Sauli Niinistö hosted the Kultaranta talks for the fifth time. The Kultaranta talks are an open forum for exchanges of views and discussion. This year’s theme was the future, with the security, policy and economic perspectives being discussed.