Home / Do we share a common language any longer? Politics and new media influence in the Kultaranta morning discussion 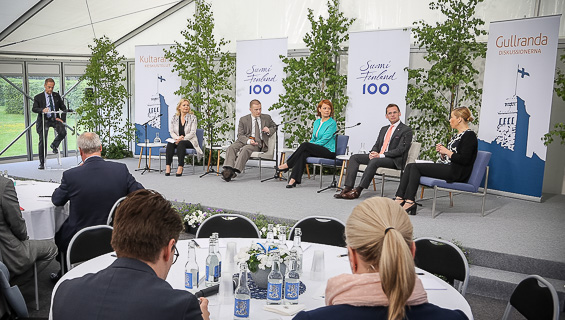 Participants in the morning talks: moderator Pekka Ervasti, journalist; and keynote speakers Ulla Appelsin, Editor in Chief of Ilta-Sanomat; Mari K Niemi, Senior Researcher of the Centre for Parliamentary Studies; Antton Rönnholm, Secretary General of the SDP; Matias Turkkila, Editor in Chief of the Finns Party newspaper; and Riikka Venäläinen, Editor in Chief of Yle. Photo: Juhani Kandell/Office of the President of the Republic of Finland

Is democracy running out of road? Is confidence in politics collapsing? The discussion at Kultaranta on the morning of Monday 12 June focused on politics in the new era of media influence. The themes included populism, the transformation of the media and the change in political language.

The post-truth society is not exactly a new idea, commented the discussion moderator, journalist Pekka Ervasti. “’A lie gets halfway around the world before the truth has a chance to get its pants on,” said Ervasti, quoting Winston Churchill.

“The media has cause for self-criticism,” said Riikka Venäläinen, Editor in Chief of Yle.

Have journalists succeeded in informing the public of the right things and reading faint signals in society? “The media have a chance to mend their ways, to genuinely clarify what they are doing and how.”

The public is shut out by certain choices of phrase

“Trust in the political decision-making system has been weakened, this is a challenge that must be taken seriously,” said Antton Rönnholm, Secretary General of the SDP. He believes that openness, participation and trust are the cornerstones of the policy perspective. ‘Country versus town’ and divergent socio-economic and cultural backgrounds have led to deepening divisions and segregation.

Senior Researcher Mari K. Niemi of the Centre for Parliamentary Studies was worried about whether we have a common language. Certain choices of phrase can alienate some sections of the public. “We researchers have an important role to play as messengers of change,” Niemi added. She also pointed out that researchers can prevent a variety of analyses arising from the same set of facts.

For Matias Turkkila, Editor in Chief of the Finns Party newspaper, there seems to be a large gap in the way current communications are framed. “There are certain painful topics which seem to be viewed as undesirable in public debate.” When such issues are divisive and important to people, they tend to emerge whether we like it or not. Turkkila believes that private and voluntary communications by citizens cannot be straightforwardly labelled as fake news, even if such a phenomenon occurs.

Ulla Appelsin, Editor in Chief of Ilta-Sanomat, referred to the ‘netflixing’ of ideas and posed the question of whether news is consumed like TV series – by binging – followed by a feeling of emptiness? “Is this ‘seen it all before’ phenomenon visible in politics and elections?” Appelsin asked. She pointed out that changes take time in democratic societies – societal development is a long process.

The participants in the discussion agreed that the internet and social media have hardened the language used in politics.

“Are we physically present? Via the internet, the language used is becoming harsher and the risk of misunderstanding is growing,” said Rönnholm.

Niemi viewed interaction as valuable, but as lacking in the social media. When people genuinely meet, the encounter is more rounded and humane.

Matias Turkkila regards it as highly tempting to write in a manner that turns one’s prejudices into a self-fulfilling prophecy. “I can’t think of an alternative solution to reading as many different news sources as possible. People are individually responsible for unearthing the building blocks of truth.”

The task of journalism: the big picture

Riikka Venälainen believes that the logic of social media hysteria must be prevented from infecting journalism. In politics and the economy, the task of journalism is to present the big picture in an interesting and understandable way. “When people feel that their voice is not being heard and do not understand what is being discussed in the media, simple and easy solutions, which often involve hatred of other groups, arise.”

Mari K. Niemi asked how we define the people and the elite. “Are the people those who gather at meetings of the Finns Party, or will the people also be present at the forthcoming Greens Party Congress?” Niemi criticised the vague nature of the populism debate – issues could be discussed using the proper terms, while recognising the diversity of the general public.

Ulla Appelsin believed it to be positive that dissatisfaction is expressed via democratic processes rather than in other, potentially destructive ways. “In the end, this means that the democratic society has won.”