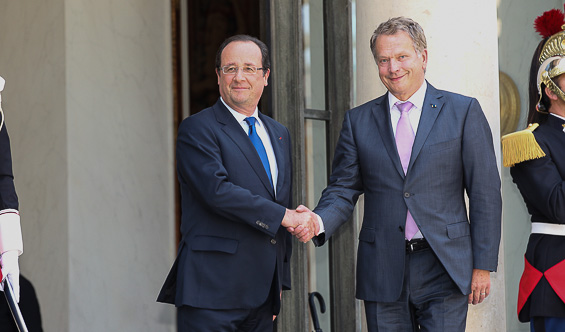 Europe’s economic situation and youth employment were in the spotlight when President of the Republic of Finland Sauli Niinistö met French President François Hollande, on Wednesday 10 July 2013, at the Élysée Palace in Paris. "Finland and France could have a great deal to teach each other with respect to their educational systems and assisting young people. It is worth exchanging experiences between ministries on these issues," added President Niinistö.

The presidents also discussed relations between the EU and Russia; according to President Niinistö, closer relations would benefit both parties. Development of European defence cooperation was also a topic of discussion.

"We Finns believe that Europeanism is important, but criticism is being directed at the EU’s structures. Now would be the time to send positive signals at EU level. People value security and developing defence collaboration could be one such positive issue, while the digital internal market would be another," commented President Niinistö.

The presidents also exchanged views on topical international issues, such as the situations in Syria, Egypt and Mali.

President Niinistö and his spouse, Jenni Haukio, are on an official visit to France, from 9-11 July 2013. The visit began on Tuesday afternoon, with a reception ceremony and an inspection of the guard of honour at the Place des Invalides, Paris. Following this, President Niinistö held discussions with French Prime Minister Jean-Marc Ayrault on subjects such as the economic situation in Europe, and bilateral cooperation between Finland and France in the energy, education and forest sectors in particular.

On Wednesday morning, President Niinistö visited the Mission Locale for Paris, a support and advice centre for 16-25 year-olds who have left school. There, young people receive personal advice on issues such as job applications and choice of educational establishment, as well as accommodation and other practical issues. The President conversed with youngsters on their views of the future and was briefed on France’s employment measures and the apprenticeship training contract, among other issues.

During his visit, President Niinistö will also meet the Presidents of the French Senate and National Assembly, and representatives of the Foreign Affairs Commission.
Jenni Haukio, spouse of the President of the Republic, will meet with her French counterpart, Valérie Trierweiler. She will also visit the French Academy.