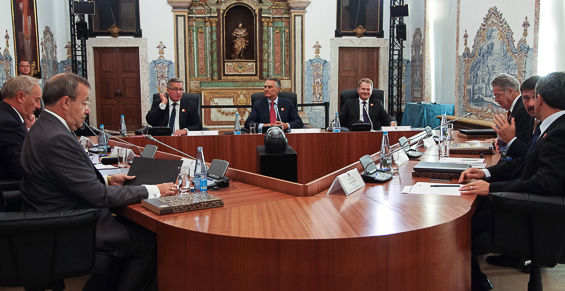 President of the Republic Sauli Niinistö participated in an informal meeting of European presidents in Braga, Portugal, on 29-30 September 2014. The main topics of the meeting included energy issues, immigration, and research and innovations.

On the second day of the meeting, Tuesday 30 September, President Niinistö delivered a key note speech at a session focusing on the role of research and innovation in the promotion of growth, competitiveness and employment.

In his address, President Niinistö reminded his listeners of the fact that innovations and scientific breakthroughs are made by people, not institutions. “We need to be able to attract the best brains and to create an atmosphere encouraging entrepreneurship, risk-taking, creativity and innovation that also tolerates failure.”

As an example, President Niinistö referred to the Lisbon Summit of 2000, at which the EU decided to become the most competitive economy in the world. However, this decision failed to generate any results and the United States and Asia have fared better in various global comparisons.

According to President Niinistö, in order to strengthen European competitiveness, Europe needs genuinely open markets and better regulation. The creation of a  digital single market plays a key role, and Europe should leverage the benefits of automation when the importance of cheap labour diminishes as a competitive factor. Europe could also become a forerunner in the development of intelligent energy solutions and innovations related to ageing, health and well-being.

“All of these sectors need better regulation, single markets, common standards, European networks, and strong trade policies. Entrepreneurship should be encouraged.” President Niinistö emphasised the significance of SMEs and start up companies in particular. The President also underlined the importance of co-operation between universities, trade and industry, and politics in promoting innovation.

On Monday, before the actual meeting began, Presidentti Niinistö held bilateral talks with President of Portugal Aníbal Cavaco Silvan, the host of the meeting. Topics discussed by the Presidents included the following: the European economy, the Ukraine crisis, and the situation in North Africa and the Middle East and its impacts on Europe.

The first working session held on Monday afternoon focused on energy issues, and energy security in particular. The session addressed the geopolitical situation and issues such as the impacts of the Ukraine crisis on the European energy security. The key note speech was delivered by President of Poland Bronislaw Komorowski.

The second session addressed immigration and illegal immigration, refugees, and human trafficking. In the debate, the presidents sought particular means of responding to the continuous immigration pressures affecting Europe’s southern border. The key note speech was delivered by ex-President of Portugal Jorge Sampaio.

The programme of the two-day meeting also included a visit to the International Iberian Nanotechnology Laboratory (INL).

The meeting of the so-called Arraiolos Group was attended by the presidents of Bulgaria, Austria, Latvia, Portugal, Poland, Germany, Hungary and Estonia. This group convened for the first time in 2003 in the location after which it was named – Arraiolos in Portugal. The Arraiolos convention was held in Finland in 2005 and 2012. 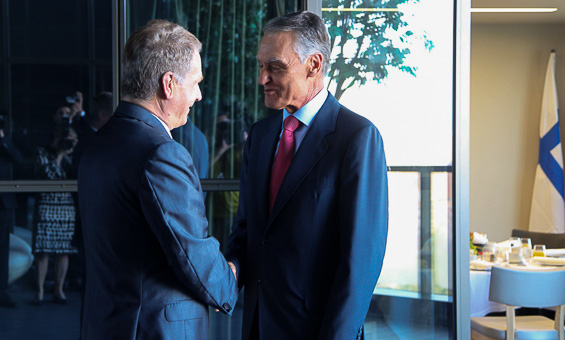 President Niinstö and President of Portugal Aníbal Cavaco Silva met on Monday 29 September. Copyright © Office of the President of the Republic