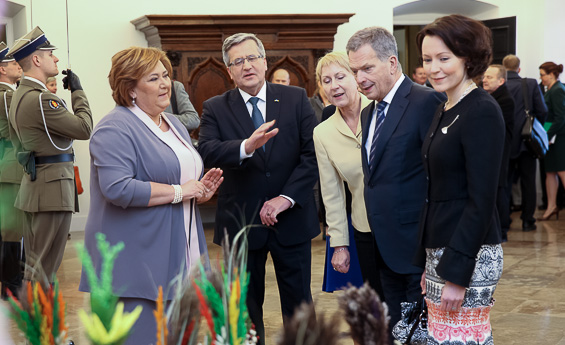 European security, the crisis in Ukraine, bilateral relations between Finland and Poland and cooperation around the Baltic Sea were on the agenda as President of the Republic Sauli Niinistö met the Polish President Bronisław Komorowski in Warsaw. President Saul Niinistö and Mrs Jenni Haukio are on a state visit to Poland from 30 March to 1 April 2015.

“We live around the same sea. The sea brings us together in many ways, one of them being business partnerships, of which there are more and more,” said President Niinistö after the meeting with his Polish counterpart. Poland is an important trading partner for Finland, and investments by Finnish companies into Poland have been on the increase. Yet there is still plenty of room for economic growth between the two countries, he added.

President Niinistö also stressed the importance of protecting the Baltic Sea. “We want to do our utmost to shed the dubious reputation that the countries around the Baltic have made it the world’s most polluted sea. We want a sea change, so to speak.”

The Presidents also talked about international matters, especially the crisis in Ukraine and relationships with Russia.

“I believe we are in agreement that the Minsk Process must continue, and our main task is to create stability for the people of Ukraine so that they can develop their society,” said President Niinistö. He added that Poland’s economic development may set an example to Ukraine.

As to Russia, President Niinistö said that we must be resolute. “Finland has supported all the EU sanctions, which unfortunately must still be held in place. We have not seen the kind of positive development that would warrant them to be lifted.”

While in Warsaw, President Niinistö also met the Polish Prime Minister Ewa Kopacz and Senate Speaker Bogdan Borusewicz, and took part in a seminar dealing with economic relations between Finland and Poland. In addition, the programme included a visit to the Warsaw Uprising Museum. The presidents’ spouses visite, for example, the POLIN Museum of the History of Polish Jews, guided by Finnish architect Rainer Mahlamäki who designed it.

On Wednesday, 1 April, the visit continued to Gdansk to the European Solidarity Centre and a seminar dealing with cooperation in the Baltic Region and development of sustainable business opportunities.

The President’s entourage included Minister of Economic Affairs Jan Vapaavuori and Minister of Agriculture and Forestry Petteri Orpo, as well as a delegation of business leaders, seeking markets in Poland for  Finland’s energy, infrastructure and cleantech expertise, among other things.