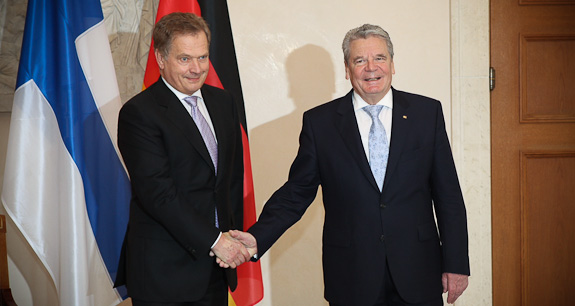 President of the Republic Sauli Niinistö made an official visit to the Federal Republic of Germany on 7–9 November 2012. The current economic situation in Europe and bilateral relations between Finland and Germany, particularly cooperation in the areas of industry and energy, were on the agenda during the visit. There were also discussion of international issues and of cooperation in the Baltic Sea region.

The official programme of the visit began in Berlin on Thursday 8 November. Official ceremonies and talks with Federal President Joachim Gauck were held at Bellevue Castle in the morning. During the day, President Niinistö met the political leadership of Germany: Chancellor Angela Merkel, Speaker of the Bundestag Norbert Lammert and Frank-Walter Steinmeier, chairman of the SPD parliamentary group at the Bundestag. The programme also included a meeting with Klaus Wowereit, Mayor of Berlin, and a walk through the Brandenburg Gate. The day concluded with a banquet hosted by President Gauck.

On Friday, 9 November President Niinistö visited Munich, where, among others, he met Horst Seehofer, Minister-President of Bavaria. The programme also included a discussion event concerning the economic relations between Finland and Germany, as well as a corporate visit to BMW.

The President was accompanied by Minister of Economic Affairs Jyri Häkämies and a delegation of corporate leaders.