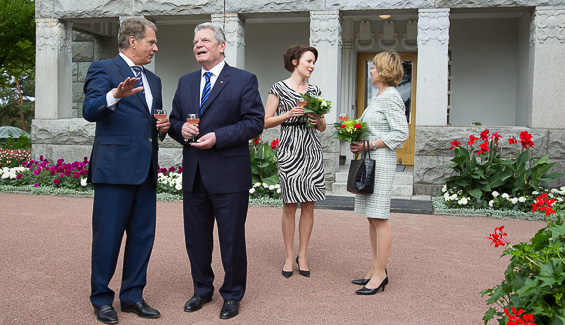 ”Germany and Finland are focused on building the future, but in a highly responsible manner. We believe that this is the basis on which Europeanism will move forward,” commented President of the Republic Sauli Niinistö, at Kultaranta on Saturday, 6 July. Federal President of Germany Joachim Gauck and spouse paid an official visit to Finland on 5-6 July 2013.

At Kultaranta, the presidents discussed the current status of the European Union, "on which we were in full agreement," affirmed President Niinistö. President Gauck notes that the two countries have a mutual understanding on the subject of stability policy in particular, which is important to Germany.

German investment in Finland is more than welcome, added President Niinistö. Energiewende, Germany’s energy transition, is of particular interest to Finnish high-tech companies. "Energiewende is about more than just the economy – it involves the possibility of an entirely new global development in terms of the energy economy." President Niinistö stated that Finnish industry is keen to be involved in building Germany’s new energy policy.

President Gauck also emphasised cultural cooperation. "We are delighted that Germany is this year’s theme country for the Helsinki Book Fair. In turn, Finland will be the theme of next year’s equivalent in Frankfurt," explained President Gauck, before revealing that he had invited President Niinistö to the opening ceremony of the Frankfurt Book Fair. "It scarcely needs stating that the President of the Republic responded with a smile and the answer: ‘Of course, I’ll come.’"

The Eastern Partnership, Russia and youth unemployment were also to the fore in the official discussions. In terms of youth unemployment, Europe is in a paradoxical situation, affirmed President Niinistö. "We are calling for the retirement age to be raised, while youth unemployment is growing. This sums up a problem and challenge for the future which is gripping Europe."

At 7.9 percent, Germany’s youth unemployment figures are Europe’s lowest. The country has a highly practical apprenticeship contract system which, according to President Niinistö, has appeared to work well. "All states and societies should attend first to securing the future. This will bring young people to the fore and to the top of the political agenda."

President Gauck mentioned that, in the German system, companies take a great deal of responsibility for employment. "We do not have a magic wand, but we do have positive experiences." We are also exporting the German apprenticeship contract system to Latvia.

Steamboat cruise and opera at Savonlinna 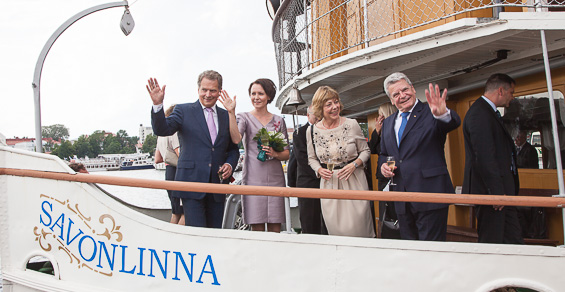 Steamboat cruises begin on S/S Savonlinna. Copyright © Office of the President of the Republic

President Gauck’s visit began in Savonlinna, on Friday 5 June. The two presidents enjoyed a breakfast as guests of the City of Savonlinna and a steamboat cruise on the S/S Savonlinna, which berthed at Olavinlinna Castle.

At the Savonlinna Opera Festival, they attended the première of Sampson and Delilah, an opera by Camille Saint-Saëns, staged in collaboration with Germany’s Theater Erfurt opera house.
In the evening, the presidents made their way from Savonlinna to Kultaranta, at Naantali, where the reception ceremony and official talks were held. The visit ended with a lunch, hosted by the City of Turku, at Turku Castle.