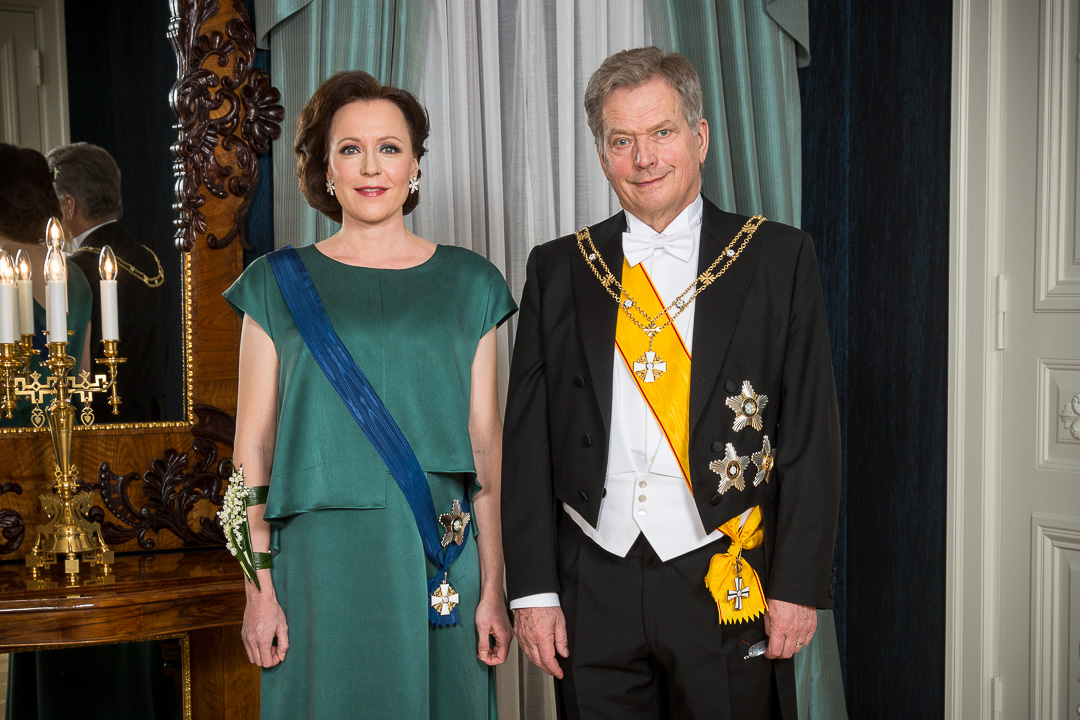 President of the Republic, Sauli Niinistö, and his spouse, Jenni Haukio, hosted the Independence Day Reception at the Presidential Palace on Wednesday 6 December 2017. The centenary of Finland’s independence was reflected in the guests invited, the music, the refreshments and the floral decorations.

Legends and young people among those invited

The guest list of around 1,900 persons included persons who have distinguished themselves during the different decades of independence, with every effort made to reflect chronological and geographical coverage. Persons invited included not only legends, but also young talents from culture, sport, economics and politics.

This year as usual, the veterans from our wars and members of the Lotta women’s auxiliary were rightful guests of honour. These were the first to arrive to shake hands with the presidential couple at 7pm to the accompaniment of the Jäger March by Sibelius playing in the background. The handshaking on the Mariankatu side of the palace ended with the regions and young people representing Finland’s future. The presidential couple had invited to the Reception two deserving young people from each region in Finland.

Choirs and well-known soloists to mark the centennial year

After the handshaking, the YL Male Voice Choir and Philomela choir performed in the State Hall. The choice of performers reflected the presidential couple’s wish to pay tribute to Finnish choir culture and our long traditions of community singing. The YL Male Voice Choir also sang whilst the veterans and Lotta women’s auxiliary are having coffee.

Katri Helena, Pentti Hietanen and Diandra appeared as vocal soloists with the Guards’ Band Combo, with a programme including classic tunes as well as more recent productions by the artists – the most-popular Finnish music, melodies from different decades uniting the different generations.

The selection of songs chosen by Finnish tenor Juha Hostikka and the Dallapé orchestra includes lasting classics and songs loved by the whole nation with some works dating back to the 1920s. The orchestra played in the salon on the third floor of the Presidential Palace.

During the handshaking, the Guards Band was be directed by Lieutenant Colonel (Mus) Jyrki Koskinen, Chief Conductor of the Finnish Defence Forces. Major (Mus) Pasi-Heikki Mikkola, Senior Conductor of the Guards Band, directed the dance music played by the band. The presidential couple danced the first waltz to Valse Lente, by Finnish composer Oskar Merikanto.

Refreshments from each region

Finland was also well-covered in the food served at the Reception, with savoury and sweet refreshments from each of Finland’s regions. Cooperation with educational institutions in the catering industry also continued, with students from secondary vocational institution Yrkesinstitut in Helsinki helping with the serving and student chefs from Oulun Palvelualan Opisto helping in the kitchen. The students also made some of the refreshments that were served.

To mark Finland’s centennial year, the Presidential Palace was decorated solely with flowers grown in Finland. The flowers were the gift of flower growers in the Finnish Glasshouse Growers’ Association to 100-year-old Finland. The Palace was decorated with a total of around 3,500 flowers from six flower gardens in different parts of the country. The floral decorations included roses, pansies, gerberas, amaryllis, chrysanthemums, poinsettias, cornflowers, tulips and lilies.

Ms Haukio’s gown is the work of a young designer

The President of the Republic’s spouse, Jenni Haukio, wore to the Reception a gown designed for her by Heidi Karjalainen BA. Heidi Karjalainen is a master’s student majoring in fashion at the Department of Design at Aalto University School of Arts, Design and Architecture.

“Finland’s future lies in young, talented people. Through my choice, I want to pay tribute to the high quality, distinct and internationally competitive teaching and research work that Aalto University does in the field of design and to give a young designer an opportunity to present their skills and creativity.”

Heidi Karjalainen won the title of Young Designer of the Year in September. Earlier in May, she came second in the Apolda European Fashion Award competition in Germany. 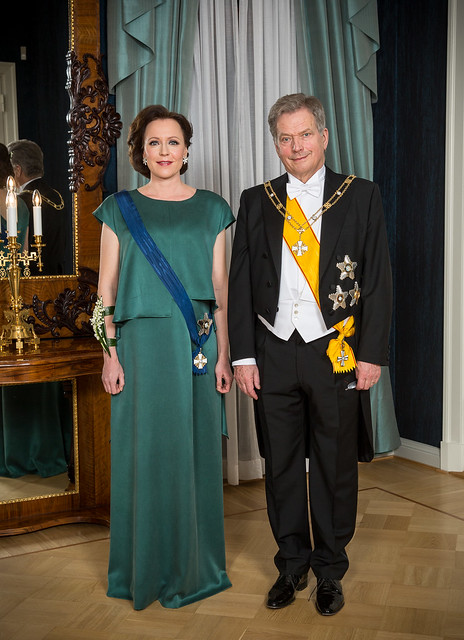