Home / Finland 100: President Niinistö at the opening ceremony of the Lahti World Championships: Lahti knows how to organise a competition and a proper winter 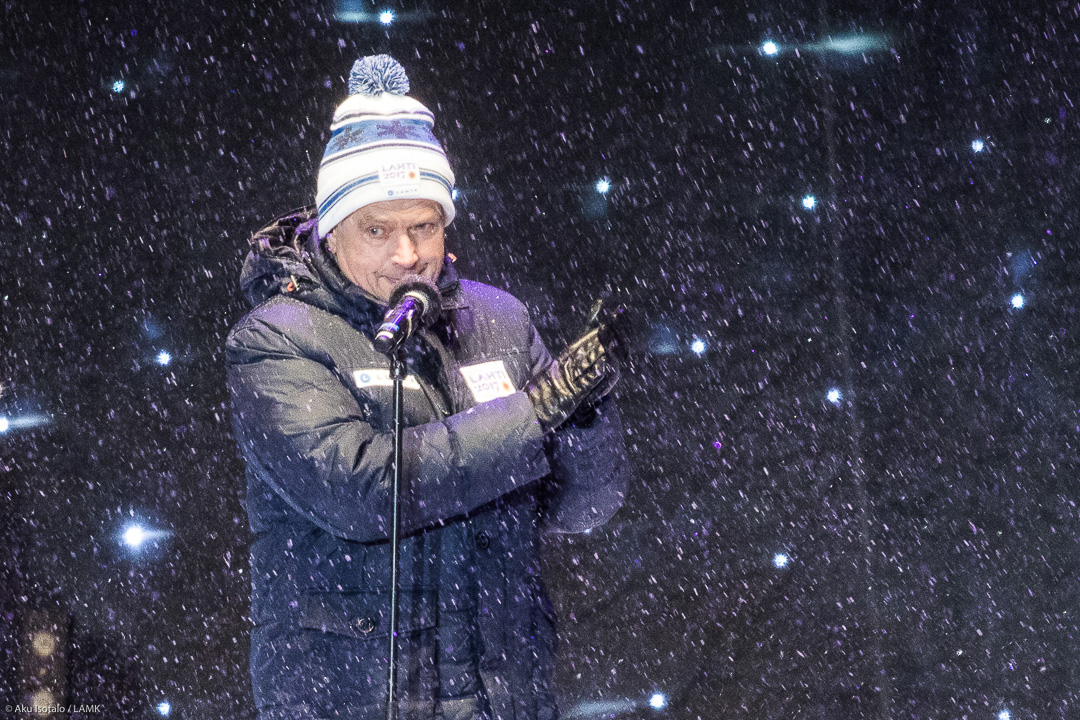 President of the Republic Sauli Niinistö visited Päijät-Häme on 22 February 2017. During the regional visit, the President dropped by Hollola and Lahti, where he also gave a speech at the opening ceremony of the World Ski Championships. Earlier in the day, President Niinistö visited Luhta’s headquarters and participated in an hour-long question and answer session for students at the Lahti yhteiskoulu upper-secondary school. In Hollola, the President was introduced to the work of the local youth council and met with members of the public in the Hollola Library’s public area.

Hopefully there will be an end to bullying

Students at Lahti yhteiskoulu grilled the President on a number of issues, such as foreign policy, the natural environment, education, President Trump and Brexit. The President entertained the students with recollections of his own school days: “Sauli attended school, but his mind was always elsewhere,” he said.

However, he had a serious message in response to many other questions. President Niinistö emphasised the importance of exercise and language skills, and pointed out that boys must not be left behind. In answer to the question of how the world and foreign policy had changed during his term as President, he commented that the world had changed surprisingly much: “No one would have been able to paint the current picture five years ago. You therefore need to be continually abreast of events. Because we’re continuously bombarded with information from several sources, we also need to be able to evaluate it,” he added.

Referring to Finland’s role in world politics and its possibilities of acting as a mediator, the President said that we should remember our size: “Finland’s strength is our ability to keep a cool head. We are able to listen and respect ideas, even if we don’t necessarily agree with them. I avoid declaring ourselves great peacemakers. You tend to do much better when you don’t make too much of yourself.”

The President referred separately to the subject of school bullying and said that he hoped to see an end to the problem. He reminded his audience that bullying can have a destructive effect that lasts a lifetime: “I want to deliver the message that, if you see someone being bullied, you should support the victim and bring them into your group.”

Situation in Europe is worrying

President Niinistö continued finding out about young people’s lives in Hollola, where members of the youth council presented council activities. The question and answer session continued when the council members challenged the President to a game of football snooker. The balls failed to hit the target, but a question could be asked after each kick. The President asked the youths about their thoughts and opinions on issues such as municipal mergers and the state of the world. For their part, they asked the President whether war was closer to hand looking back, or looking ahead.

After the meeting in the library, President Niinistö moved to the library’s public area to meet other residents of Hollola. In his greeting, he reminded his listeners that Finland was one of the top countries in surveys measuring the entire range of positive issues: “Finland is indeed a great place to live. When I think about what’s going on in the world, it brings home to me the fact that this country is well worth cherishing, well worth developing and, if necessary, well worth defending.”

With regard to the world in general, President Niinistö said that he was most worried about the situation in Europe. “We have struggled to find common ground. However, I take comfort in a certain human principle; that as soon as most people begin to see that this road, this general direction being taken, is the wrong one, then more and more will understand that the time has come to act. This will be the EU’s salvation.” According the President Niinistö, defence policy is the biggest single issue on which the EU should close ranks.

At the end of the day, the President headed for Lahti’s market square and the opening ceremony of the Lahti World Championships. Snow fell horizontally in the blustery conditions, but the President turned this to Lahti’s advantage: “Lahti has a fine tradition of organising the Championships and, as we can feel down to the marrow of our bones, it can also arrange a proper winter.” During the school question and answer session, the President had bet that Finland would win five medals. At the opening address, he explained why a bigger haul was not to be expected: “The Finnish national team is polite enough to have promised to share the medals with others.”