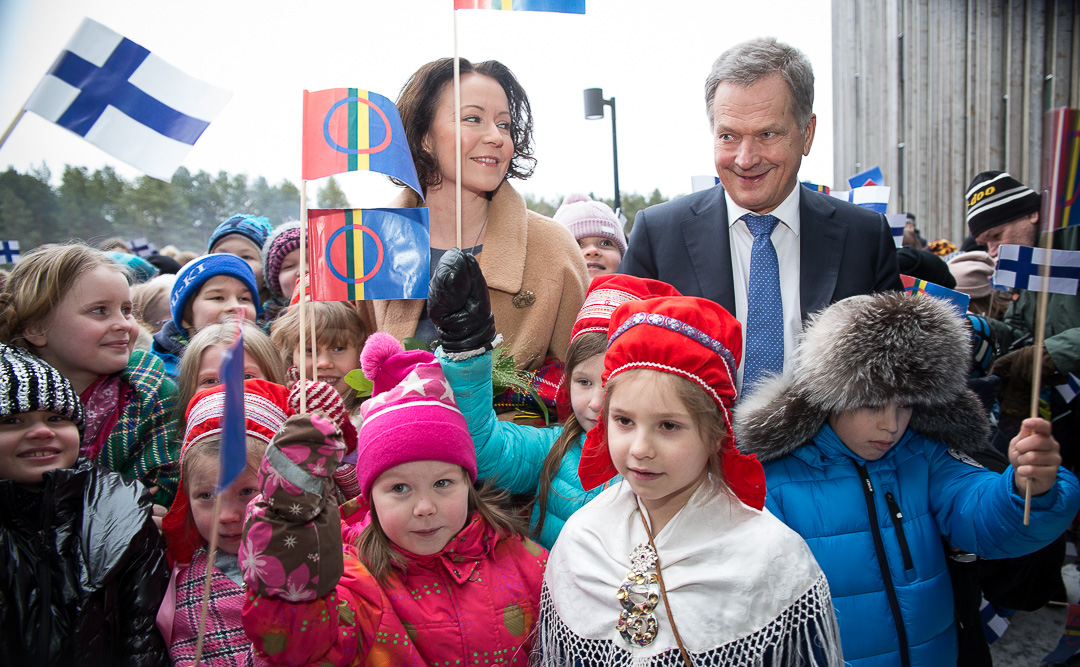 The presidential couple met with children before the SuomiSápmi 100+100 celebration at Sajos in Inari. Photo: Matti Porre/The Office of the President of the Republic

“We will begin our series of regional visits for Finland’s centenary here, in Inari, Lapland. It is a great pleasure to do so – to start so far away but so close by. In no other place can I remember seeing so many smiling faces as I can here, today. Those young people, schoolchildren, are clearly happy. That is a major issue,” commented President of the Republic Sauli Niinistö while visiting the Sámi Museum and Nature Centre Siida in Inari on Monday, 6 February 2017.

The visit to Lapland by President Niinistö and Mrs Jenni Haukio is their first regional visit made in honour of Finland’s centenary year. The journey continued from Tervola on Tuesday 7 February.

Closer cooperation between the state and the Sámi

“Buori sámi álbmotbeaivvi!”  – Happy Sámi National Day! – said President Niinistö at the SuomiSápmi 100+100 celebration in the Sámi Cultural Centre Sajos. The roots of National Day go back a hundred years, to when the first Nordic Sámi Convention was held in Trondheim, Norway. The celebrations were organised by the Sámi Education Institute and primary, secondary and upper-secondary schools of the municipality of Inari.

“As the only indigenous people of the European Union, the Sámi have continued to drawn attention to their rights. In this, I hope that cooperation between the Finnish state and the Sámi intensifies. That we understand each others’ viewpoints, and where they differ and overlap,” said President Niinistö in his address.

In his speech, the President quoted from Sámi rap artist Ailu Valle on living between two cultures and the related challenges.

“Ailu has stated that living within two cultures has influenced his music and ideas. This is a source of both enrichment and contradictions. He is both blessed and cursed, because biculturalism forces you to see things from more than one perspective,” said President Niinistö.

In exchange, Ailu, who performed during the celebrations, offered the President involvement in rap music after his term in office. In addition to rap music, the event featured musical performances, yoiks, poems and stories in both Finnish and Sámi by children and youths. The guests also watched dance performances and an animation about Sámi mythology.

President Niinistö stated that the Sámi culture was alive and well. “The cultural heritage has been cherished and its traditions carried forward to new generations. In addition, today’s Sámi culture, which cuts across a range of art forms and which we can enjoy here today, is unique and contemporary. It is flourishing,” the President pointed out.
After the celebration, the presidential couple visited the Sámi Museum and Nature Centre Siida.

In Inari, President Niinistö also met representatives of the Sámi Parliament and the municipality of Inari, with whom he discussed topical issues concerning the Sámi.

“A few themes have been topical for a long time. Of course, one such theme is the definition, under laws enacted by the Sámi Parliament, of who is Sámi. Long discussions on this have been held at the Sámi conventions of other Nordic countries, models have been sought and, I think, discussions have been held on them with the Prime Minister’s Office,” President Niinistö told the media later.

“There are also concerns about mining and environmental legislation and it is highly understandable that people here are very dependent on how their environment is treated. So it is good that this debate is taking place. I hope that a solution is found,” continued President Niinistö.

From Inari tales to the Kiilopää fell

In the main library of the municipality of Inari, in Ivalo, Mrs Jenni Haukio explored the Tarinoiden Inari (Tales of Inari) audio archive, of which she is the patron. This freely available online archive includes thousands of oral tales which have been collected with extensive help from the people of Inari. Also present was the 100-year-old Hilda Kukkola, whose experiences of life are recorded in the archive.

“This is an utterly unique project in Finland. Hopefully, this approach will be applied elsewhere. Repositories of folk wisdom are very valuable,” said Mrs Haukio.

The presidential couple was also introduced to the operations of Suomen Latu at the Fell Centre Kiilopää. The main topic of discussion was how to encourage Finns to get more exercise. The presidential couple were given the opportunity to exercise during a short snowshoe hike. The visitors also had the chance to encounter Lapland’s wildlife during their snowshoe trek on the Vasapolku trail, where they saw the tracks of a willow grouse and a stoat.

The presidential couple continued their tour of Lapland in Tervola on Tuesday 7 February. Almost a thousand people, from small children to senior citizens, had gathered in the yard of the Lapinniemi school building. The presidential couple thanked the crowd for their reception at Tervola which, as in Inari, was warm, good-humoured and full of belief in the future, despite the weather being slightly on the frosty side.

In his address at the meeting, President Niinistö congratulated Tervola on its 150th anniversary. The President pointed out that Finland’s centenary gives the people of Tervola a double reason to celebrate.

“By all measures that I have seen, Finland is in the top ten countries. We are the world’s most stable country. We are among the best performers in terms of know-how, innovativeness, happiness, and in pretty well everything else,” said President Niinistö, reminding his audience of Finland’s strengths.

President Niinistö also emphasised taking responsibility for each other. In his view, Finland’s success is largely based on people’s sense of responsibility. Everyone has a chance to prevent social exclusion and loneliness.

“Why not do something small every now and then that takes account of, or even helps, those around us? This is particularly true of young people. Bullying at school and the resulting social exclusion is now a topical issue,” emphasised President Niinistö.