Home / Finland and Tajikistan wish to enter into closer cooperation 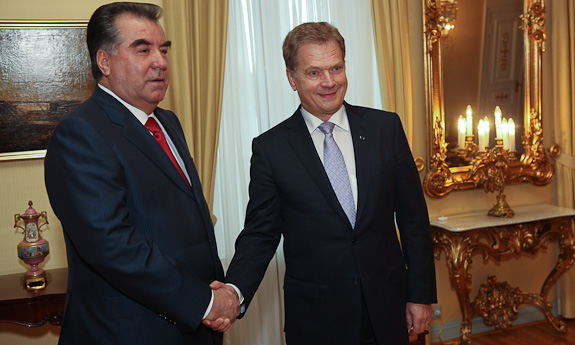 On Wednesday 24 October, President of the Republic Sauli Niinistö received Emomali Rahmon, President of Tajikistan, who had arrived in Finland on a three-day working visit.

After formal talks, Finland and Tajikistan signed a double taxation treaty. At the press conference following the signing, President Niinistö noted that there are plans to expand the treaty base between the two countries. “But practical cooperation is the main thing, of course,” said Niinistö.

“There is a great need for infrastructure building in Tajikistan, and in Central Asia in general. There are also plentiful natural resources in the region. Finland, meanwhile, has plenty of expertise and technology suited for these particular purposes,” explained Niinistö.

The President of Tajikistan, Emomali Rahmon, said that there is plenty of untapped potential in bilateral relations between Finland and Tajikistan.

“Promises of future growth may be found in hydropower, the brewery industry, light industry, the food industry, the processing industry, mining and agriculture,” he said. Tajikistan is also interested in increasing trade, in obtaining Finnish investments and technology, and in developing cooperation in the areas of politics, culture and tourism.

Afghanistan featured in the talks

Afghanistan was of particular interest as the talks turned to international affairs.

Tajikistan naturally has a vested interest in the future of Afghanistan, as the two countries share 1,400 km of land border. However, the two Presidents stressed that establishing peace in Afghanistan is of immediate importance to the whole world because of the threat of terrorism and the drug trade, for instance.

The two Presidents reported that cooperation between Tajikistan and Finland will be actively pursued not only bilaterally and through the EU but also regionally and through umbrella organisations such as the UN and the OSCE.

“Because it is our intention to continue the fruitful dialogue between our two countries, I have invited by distinguished colleague, the honourable President of the Republic, to pay an official visit to our country at his convenience,” said President Rahmon.

After the press conference, President of the Republic Niinistö hosted lunch for his guest.

“The importance of the rule of law cannot be overstated”

Tajikistan is one of the poorest countries in Central Asia and in the world, but recently discovered deposits of oil and natural gas may serve to jump-start the national economy. At the moment, the country is looking at a growth rate of more than 7%.

In his speech at lunch, President Niinistö emphasised that Finland wishes to support Tajikistan at its present juncture.

“Considering the geopolitical nexus where Tajikistan is located, it is vital for internal developments in your country to be founded on a socially and economically sustainable basis,” said Niinistö.

“You yourself, my distinguished colleague, have noted that the key function of legislation is to protect human rights and liberties. The importance of the rule of law cannot be overstated when it comes to securing and building internal stability in a country.”

Trade between Finland and Tajikistan is negligible at the moment. However, President Niinistö remarked that he appreciates the efforts of President Rahmon in easing the entry of businesses in Finland and other European countries onto the Tajikistan market.

“Your country is not very well known in Finland as yet. Your visit will help to make Tajikistan somewhat better known here.”

During his visit to Finland, President Emomali Rahmon will be meeting Speaker of Parliament Eero Heinäluoma, Prime Minister Jyrki Katainen and Parliamentary Ombudsman Petri Jääskeläinen in addition to President Niinistö. The programme for the three-day visit further includes a meeting with the Finland-Tajikistan Society and visits to the Finnish Environmental Institute, the Geological Survey of Finland and TeliaSonera, whose subsidiary Tcell is the leading mobile phone operator in Tajikistan.