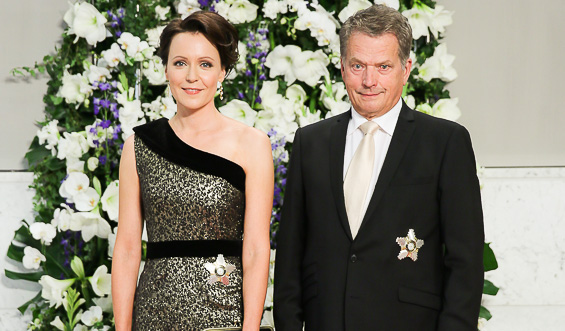 President of the Republic of Finland Sauli Niinistö and his spouse Jenni Haukio hosted the Independence Day concert and reception on 6 December 2013.

Around 1,700 guests from all provinces of Finland and from various sectors of society attended the event at Tampere Hall. With its selection of guests, the presidential couple wanted to emphasize the value of all kinds of work performed throughout the country towards the success of independent Finland.

The greeting ceremony began with war veterans, almost one hundred of whom had been invited to the Independence Day reception. After the greeting ceremony, the guests took their seats at the Main Auditorium of Tampere Hall for the concert. Lasting just under one hour, the concert represented a journey into the Finnish mindscape on the wings of music and literature.

The soloists were Soile Isokoski, Vesa-Matti Loiri, Waltteri Torikka and Maria Ylipää. The musical programme included pieces from Sibelius’s incidental music to The Tempest, poems by Eino Leino set to music, and the song Suojelusenkeli (Guardian Angel) by P.J. Hannikainen. A host of actors interpreted excerpts from the works of Finnish authors written during the era of Finnish independence, including Väinö Linna, Tove Jansson, Eeva Kilpi, Kari Hotakainen and Rosa Liksom.

The story told by the musical pieces and literary extracts provided a perspective on the Finnish soul – on who we Finns are and how our national identity was built. The poetry and prose had been chosen in collaboration with the Finnish Literature Society.

The concert concluded with the Finlandia Hymn by Sibelius, performed by The Sympaatti Youth Choir and Pirkanpojat Boys Choir, and the national anthem with the audience joining in. The orchestra was Tampere Philharmonic Orchestra, conducted by Santtu-Matias Rouvali.

After the concert, the presidential couple hosted a sit-down coffee event for war veterans. The other guests attended a reception with a buffet of local delicacies in Sorsapuisto Hall at Tampere Hall. The ingredients used for the foods were local and organic produce from small producers in the Pirkanmaa area,

with the dishes being prepared by Tampere Hall in cooperation with the Pirkanmaa Chefs’ Association.
Background music during the handshaking ceremony and the coffee event for war veterans at Tampere Hall was provided by the Guards’ Band under the direction of Lieutenant Colonel Elias Seppälä, Chief Conductor of the Finnish Defence Forces, and Major Jyrki Koskinen, Head of the Guards’ Band. At the reception in Sorsapuisto Hall, background music was provided by the Tampere Philharmonic Orchestra’s Salon Orchestra.