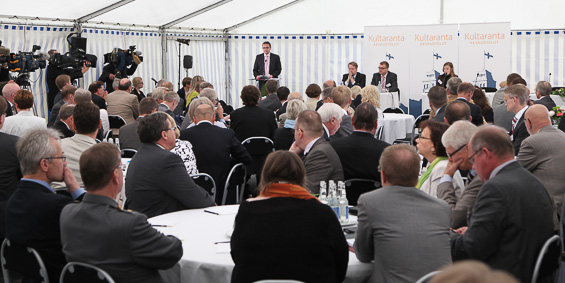 The opening session of the Kultaranta talks on Monday 17 June featured an exploration of Finland’s role in a changing world. In his opening remarks, President Niinistö encouraged the participants to be bold and transparent, and they took him at his word.

Professor Hiski Haukkala asked whether Finland will end up on the periphery of the EU as a result of changes in Europe. “If the Common Foreign and Security Policy does not work, do we have a foreign policy independent of the EU?” he asked. “Do we have any realistic alternatives? Probably not."

“The Nordic countries are a good group for Finland to identify with,” said Haukkala. “But is Finland really a Nordic country any more? How do we position ourselves in the Nordic context in this day and age?”

Tuomioja: A world of interdependencies

Foreign Minister Erkki Tuomioja noted that we are living in a world of two realities. The old world of realpolitik relies on politics of power and military threat scenarios. “And then there is this other world, a world of interdependencies,” the Minister continued. In a world where everything is connected to everything else, security must be achieved in cooperation. This is a reality that is becoming more dominant all the time.

In an interdependent world, everyone is vulnerable to global and otherwise non-governmental threats, Tuomioja explained. “We will have to address not only the challenge of sustainable development but also the question of whether we can retain our successful welfare society model.”

According to Li Andersson, Chairman of the Left Youth, political analysis in Finland needs an update. The recent data leak is a prime example of how our world and our society are changing. “Much of the time we spend online and most of the data we share go through the cloud servers of a handful of service providers, which are apparently accessible to the US intelligence services and perhaps others too.”

Andersson said that a small country has big decisions to face. “Will we remain militarily non-aligned? What is the role of human rights in foreign policy?” asked Andersson. Publicly declared goals concerning human rights and the promoting of democracy sound hollow if we also sell arms to countries that are at war, she said.

Sipilä: Call a spade a spade

The fourth speaker at the morning session at the Kultaranta talks was Juha Sipilä, Chairman of the Centre Party. Sipilä noted that Finnish society is facing a crisis of leadership that forces all of us to re-evaluate our actions. “We are not agile, we are not in tune with the times.” Economic policy and foreign policy are becoming increasingly intertwined. “Asia is becoming wealthier, and the standard of living in Europe threatens to decline. We have not realised this yet, as we continue to bolster our welfare on borrowed money,” said Sipilä.

Sipilä listed four points that will help us keep up with the times: failures are for learning, not punishment; problems must be discussed frankly, calling a spade a spade; we must learn to question our own convictions; and achieving change is enjoyable and motivational in a creative community. “The prosperity of a small country depends not only on its economic strength but also on its will and ability to assume global responsibility,” he concluded.

The last speaker of the session was Matti Apunen, Director of the Finnish Business and Policy Forum (EVA). He said that the grand ideological tension in the world today is between universalism and exclusivism. Universalism emphasises human rights, international organisations and the social media, while exclusivism favours nationalist tendencies and differences instead of similarities. In the West, the latter manifests itself as populism and heightened national feeling.

Apunen remarked that foreign policy is increasingly becoming trade and economic policy. “What are the networks where we can guarantee productivity improvements that will genuinely keep us up to speed in global competition?” he asked. Apunen noted that in a complex system the security policy situation may change abruptly: “When an empire is ready to collapse, it may collapse very quickly indeed.”

The opening statements were followed by a fast-paced discussion touching on the relationship between economy and diplomacy, Nordic and trans-Atlantic cooperation, the concept of non-alignment and the question of which tables Finland should be sitting at.