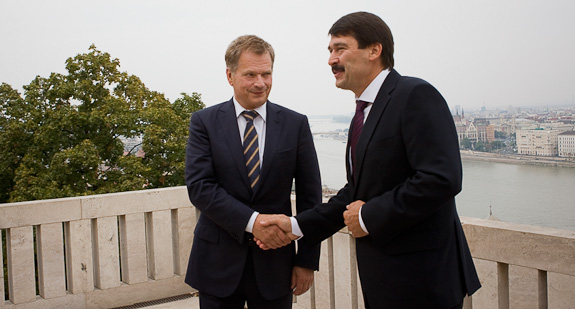 President of the Republic Sauli Niinistö made a working visit to Hungary on 4–5 September to meet Hungarian leadership and to attend the opening ceremony of the World Congress of Finno-Ugric Peoples. Talks between President Niinistö and Hungarian President János Áder on Tuesday, 4 September centred on Europe’s current economic situation and future challenges, the bilateral relations between Finland and Hungary, and Hungary’s democratic development.

“Finland and Hungary have much in common. In terms of our languages we are ‘cousins’, with a close, living connection to each other,” President Niinistö said.

While in Budapest, President Niinistö also met Minister for Foreign Affairs János Martonyi and Speaker of the National Assembly László Kövér. Present at the meetings, and also attending the World Congress of Finno-Ugric Peoples, was Estonian President Toomas Hendrik Ilves.

On Tuesday evening President Niinistö visited Budapest’s Elte University, where he was awarded an honorary doctorate by the Faculty of Legal and Political Sciences. Elte University’s department of Finno-Ugric Studies has offered studies in the Finnish language since the 19th century, and enjoys vivid student and lecturer exchange with Finnish universities. After receiving the honorary doctorate President Niinistö held an honorary lecture on Finland’s history in European integration, and on Europe’s current economic situation and future challenges.

According to President Niinistö, the European economic crisis is also giving rise to social and political pressures. He urged the audience to contemplate how European democracy might cope in a situation in which its economic basis is subject to change and competition. “High-quality public administration and enlightened decision-making generally lie behind sustainable success. A predictable and fair operating environment is created by a constitutional state, good administration, and open and democratic institutions. These also enable social changes, without sacrificing stability,” the President said.

Finno-Ugric Peoples get together

On Wednesday, 5 September President Niinistö attended the opening ceremony of the 6th World Congress of Finno-Ugric Peoples in Siófok. Organised every four years, the World Congress handles questions relating to the retention and revival of the language and culture of Finno-Ugric peoples, as well as to the rights of indigenous peoples and minorities.

“We must take special care of young people. They represent the future – without them there is simply no future in the first place,” said President Niinistö in his speech at the conference. “The young in particular are perhaps most deeply involved in our rapidly internationalising world. Account should always be taken of the perspective of the young. This is the only way to ensure continuity in our work.”

The programme of the two-day visit to Hungary also included the inauguration of the Finnish Museum at Pappenheim Castle.