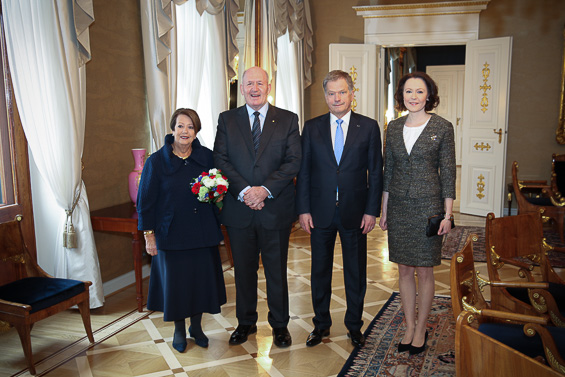 Governor-General of Australia, Sir Peter Cosgrove, and his spouse Lady Cosgrove with President Sauli Niinistö and Mrs Jenni Haukio. Photo: Juhani Kandell/Office of the President of the Republic

The Governor-General of Australia, Sir Peter Cosgrove, and his spouse Lady Cosgrove made a state visit to Finland during 27–29 April 2016. President of the Republic Sauli Niinistö and his spouse Mrs Jenni Haukio received the guests at the Presidential Palace on Thursday, 28 April 2016.

The Governor-General also met Maria Lohela, the Speaker of the Finnish Parliament; Prime Minister Juha Sipilä; and General Jarmo Lindberg, Commander of the Finnish Defence Forces. The programme also included the laying of a wreath in Hietaniemi Cemetery, a visit to VTT Technical Research Centre of Finland, as well as meetings with business representatives.

Subjects of discussion during the visit included bilateral relations between Finland and Australia, innovation cooperation, the strengthening of trade and economic relations, and regional issues in Asia and Europe.