Home / Green economy in focus on visit to Kazakhstan 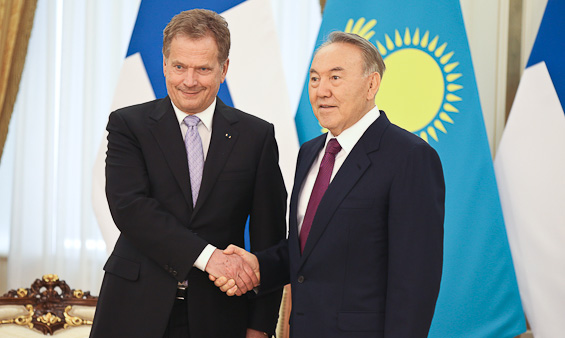 President of the Republic Sauli Niinistö and his spouse Jenni Haukio made a state visit to Kazakhstan on 16–18 April 2013.

President Niinistö engaged in official talks with President Nursultan Nazarbayev on Wednesday 17 April. The talks focused on bilateral relations and cooperation opportunities between Finland and Kazakhstan, regional and international issues, relations between the EU and Kazakhstan, and progress of democracy.

The green economy and modernisation were focused on as special themes in bilateral relations. “Kazakhstan is one of the most rapidly growing economies in the world. Finland has a lot to offer in the development of the green economy,” said President Niinistö.

Kazakhstan has declared that it regards Finland as a model for innovation, education and science. There is also a great deal of potential for cooperation in business: Finland has a lot to offer in the mining industry, energy efficiency, environmental technology, construction and health care.
Several agreements and cooperation documents were approved and signed during the visit, including a partnership declaration on green economy development and modernisation together with inter-ministry action plans on cooperation in the education sector and on environmental technology development A city twinning agreement between Oulu and Astana was also signed during the visit along with education and environmental agreements.

Jan Vapaavuori, Minister of Economic Affairs, was in the President’s entourage along with a delegation of business leaders. The visit featured a high-level business event focusing on economic relations between Finland and Kazakhstan, attended by both Presidents.

The President’s entourage further included Pekka Hallberg, former President of the Supreme Administrative Court, who has been involved in a project to foster the rule of law in central Asia.

On Thursday 18 April, President Niinistö met representatives of Kazakhstan’s political parties and Kuanysh Sultanov, Chairman of the Human Rights Commission. President Niinistö talked with Chairman Sultanov about the human rights situation in Kazakhstan and development of the rule of law.
The programme also included a visit to the Khazret Sultan Mosque and Nazarbajev University.