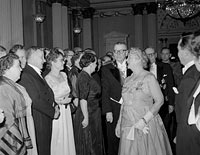 The history of the Independence Day reception stretches back to 1919, when the first afternoon reception was held at the Presidential Palace. In 1919-1921 the guest list included the Government, diplomats and civil servants, about 150 persons in all. Coffee was served and the programme included music. After the reception festivities continued at the National Theatre.

On 6 December 1922 President K.J. Ståhlberg and Mrs Ester Ståhlberg hosted the first evening reception at the Presidential Palace. The reception began at nine o’clock and over a thousand guests were invited. Singing, music and dancing were on the programme.

In 1923 and 1924 receptions were held in the afternoon, but the next year President Lauri Relander and Mrs Signe Relander invited about 1,600 people to celebrate on the eve of Independence Day, 5 December 1925. Guests included the Government, diplomats, Members of Parliament, high-ranking officers, senior civil servants, artists and other prominent people. Music and dancing were on the programme and the reception lasted until late at night. Similar receptions have been held ever since, though less regularly in the beginning. Receptions were not held in 1926, 1931, 1932 or during the war years, 1939-1945.

President Mauno Koivisto and Mrs Tellervo Koivisto at the Independence Day reception at the Presidential Palace in 1986. Photo: Lehtikuva

Receptions in their present form

The Independence Day reception at the Presidential Palace has been called by its present name since 1964. The number of guests has varied from about 1,600 to 2,000.