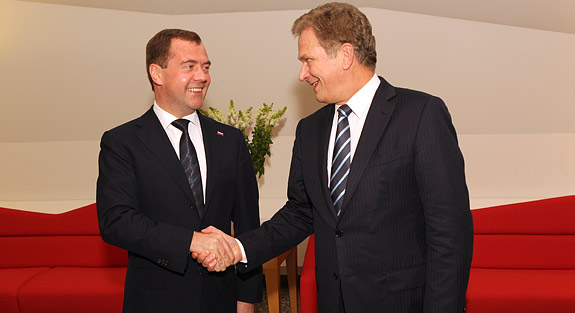 Prime Minister Dmitri Medvedev arrived at Mäntyniemi in the approaching twilight of the afternoon. There was light and time enough, however, despite the tight schedule of his visit, for Prime Minister Medvedev and President of the Republic Sauli Niinistö to admire the view of the sea through the pine trees from the main reception hall.

As well they should. Although Medvedev has visited Finland several times over the years, the visit to Mäntyniemi on Wednesday 14 November 2012 was his first.
“This is a great Finnish-Russian day,” he said with a smile as President Niinistö cordially welcomed him.

President Niinistö reported that the principal topic of the bilateral talks was investments, and more generally the economy.

“Medvedev was interested in Finnish investments in Russia, while I naturally asked him about potential Russian investments in Finland,” said President Niinistö when briefing the media about the talks between the two men in Mäntyniemi.

“Investments in industry would create jobs in Finland,” said President Niinistö in response to the question of what kind of foreign investments he would like to see.
“More generally, in the context of export promotion I feel that we should be promoting imports just as strongly, specifically the import of industrial investments. They always translate 100% into Finnish jobs.”

The President considers the Russian economy to be more stable than that of Europe at the moment.

“This offers us opportunities for balancing our own economy too, assuming that our economic cooperation flows smoothly – and there is no reason why it should not. Our talks today certainly gave me confidence on that count.”

From Mäntyniemi, Prime Minister Medvedev proceeded to the Finnish-Russian forestry summit at Finlandia Hall, after which he visited the Otaniemi campus of Aalto University, and concluded his visit with a meeting with President Tarja Halonen. 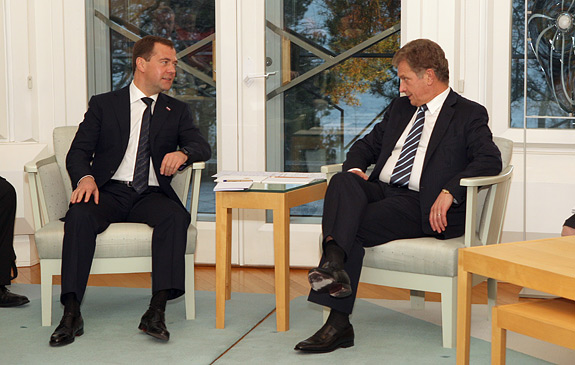