Home / Kultaranta talks ask ‘Where is the EU headed?’ 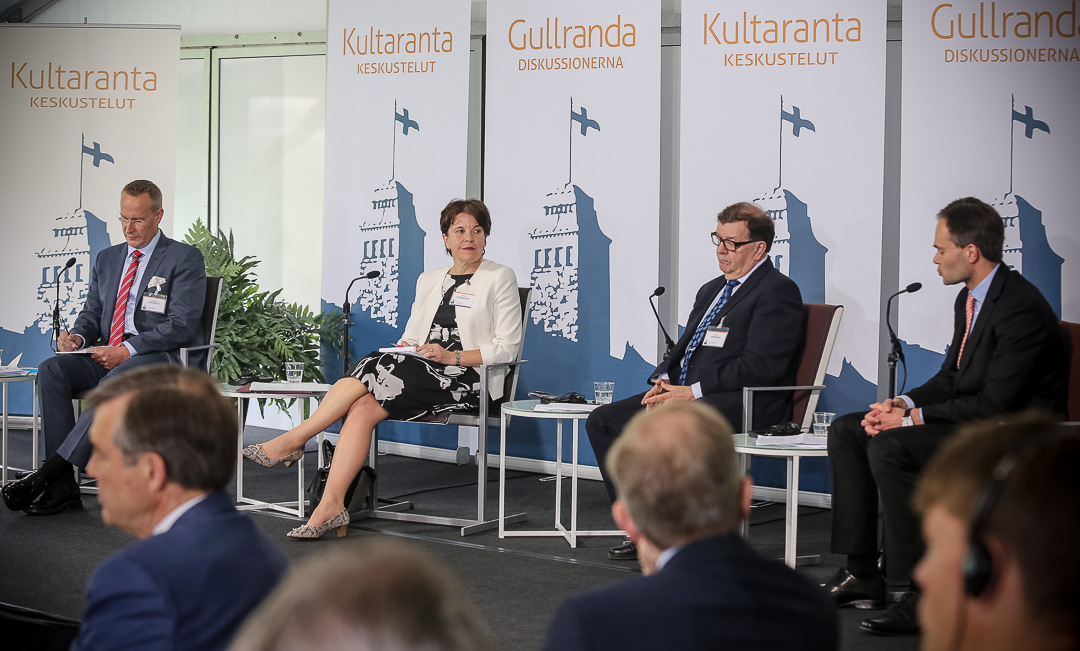 The future and credibility of the European Union was the subject of the morning’s second panel discussion.

Elina Ravantti, moderator of the discussion and Head of World News and Current Affairs at the Finnish state broadcaster YLE, asked the panelists to assess how the current EU will be remembered in 2036, twenty years from now.

Teija Tiilikainen, Director of the Finnish Institute of International Affairs, stated that – until now – the EU’s development had been driven by a powerful push towards integration, but no agreement had been reached on burden sharing. “Collective responsibility is a question that has never been resolved.”

According to Tiilikainen, the Union will continue to stumble over this issue, since no broad political agreement has been reached on the subject.  “The collective responsibility of Member States must be defined in response to Europe’s economic and financial turbulence and the refugee crisis.”

Markku Jokisipilä, Director of the Centre for Parliamentary Studies at the University of Turku, believes that the EU’s future hangs on its ability to reform organisationally and select key areas in which it wants to deepen collaboration.

“The EU has made itself into all too soft a target for its critics. EU countries need to rethink their relationship with nationalism. Willingness to recognise the existence of the national horizon will have to be found at the highest level of the EU,” said Jokisipilä, urging the EU’s elite to engage in a constructive discussion with nationalists.

MEP Paavo Väyrynen of the Centre Party of Finland sees the EU breaking up rather than integrating more closely. “The federalist ideology has led the EU into a dead end. The EU’s rapid expansion in 2004 led to a profound contradiction, when EU cooperation was deepened – but only among some regions and countries.”

Kai Mykkänen, an MP from the National Coalition Party, believes that economic performance will ultimately decide what kind of Union we have twenty years from now.

“Europe has both global economic winners and losers.  It remains to be seen how the various EU countries will manage in reforming their welfare states.”

Tiilikainen pointed out that the EU’s credibility problem is partly a myth, even if the refugee crisis has highlighted the criticism that the EU is ineffectual. “Opinion polls show that, in several Member States, many EU institutions enjoy a higher level of trust than national institutions,” Tiilikainen declared.

Migration will change the EU

The audience was interested to hear how the refugee crisis will affect the future of the EU and whether the Nordic countries have a shared model for processing asylum seekers.

“Overnight, the refugee crisis deprived the EU of its gloss of humanism. It should be noted that the harsher tones heard on this issue are impacting on the question of internal migration within the EU,” Mykkänen claimed.

The panelists also discussed the Nordic countries’ shared model for managing and integrating migrants. During the debate, the question was raised of what to do in the case of migrants who are refused asylum but do not want to return to their home countries.

A rapidly changing situation, to which inflexible EU institutions were unable to respond rapidly, presented a challenge to managing immigration: “An acute crisis was being managed while establishing a long-term policy. That is a challenging combination,” Jokisipilä added.