Etusivu / Kultaranta talks close: “There are differences between Finland and Sweden, but those differences are hard to define” 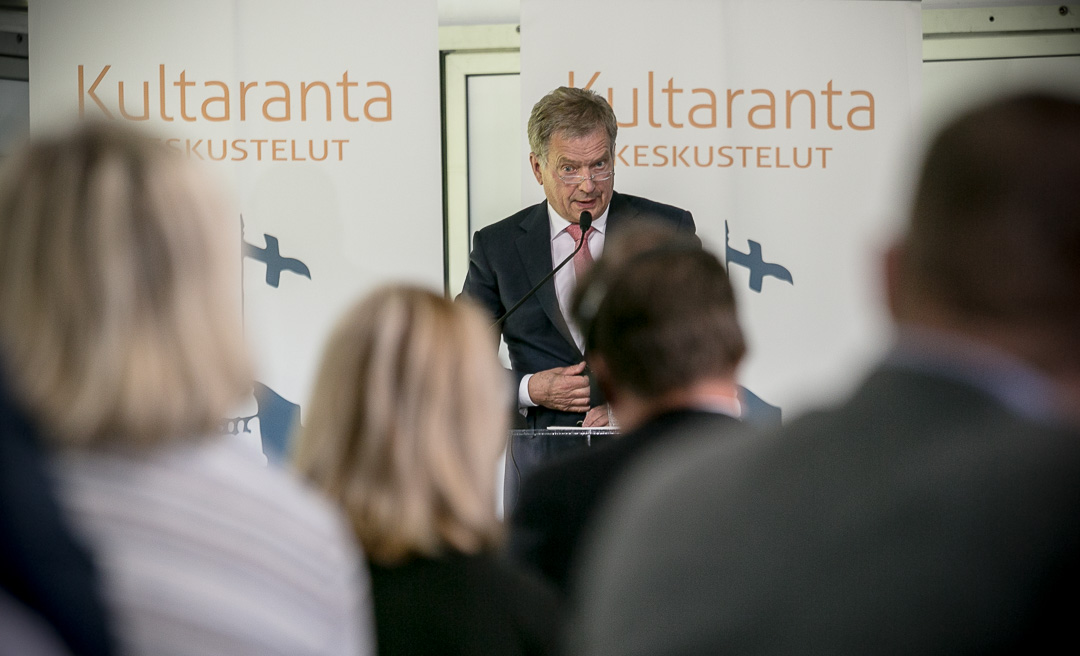 President Niinistö concluded the Kultaranta talks of 2016. Photo: Matti Porre/Office of the President of the Republic of Finland

The talks revealed one difference: in their speeches, the Swedish participants pointed out that Sweden would not invite the President of Russia for a visit. “I hope you understand another difference, which is more significant or at least longer by more than 1,300 kilometres. Russia’s border with Finland is longer than Russia’s borders with all other EU member states combined, and nearly as long as its borders with all NATO member states. To make this situation easier to grasp, imagine Norway as Russia,” President Niinistö replied.

According to President Niinistö, the discussions on European security and the future of Europe raised three key themes: the EMU, immigration and national political pressure. “Could it be that we have broken our own rules, or infringed our own values, in relation to all three themes?” President Niinistö asked.

From Arctic hype to realism

In his summary of the discussions of the working group on Arctic cooperation, Risto E. J. Penttilä, President and CEO of the Finland Chamber of Commerce, said “Arctic hype has gradually turned into Arctic realism.” The Arctic is no longer considered an Eldorado; instead, it is a region of everyday cooperation in areas such as border control. The reasons behind this change in mindset include geopolitical developments and the falling price of oil and gas. The region still offers great economic potential. “Construction projects in northern Sweden and Norway offer significant opportunities for Finland,” Penttilä notes.

According to Penttilä, leadership in Arctic issues needs to be established in the European Union. Any marketing of Arctic opportunities should involve the EU in its entirety, and leave room for the views of Norway and Iceland. The working group also discussed Finland’s preparation for the chairmanship of the Arctic Council in 2017-2019.

Päivi Nerg, Permanent Secretary at the Ministry of the Interior, told the working group about the lessons learned by the authorities in terms of resolving the asylum seeker situation. She emphasised the importance of having a shared understanding of the situation in hand, a shared vision, and a common discussion forum for all of the competent immigration authorities.

Osmo Soininvaara suggested that Finland should learn from the integration policies and practices adopted in Sweden and Canada. He explained that in Sweden, an asylum seeker issued with a negative decision could obtain a work permit if he or she had managed to find a job while waiting for an asylum decision.

Commenting on integration measures, Matti Apunen, Director of the Finnish Business and Policy Forum EVA said: “We must understand that time is of the essence.” He believes we must learn to tolerate positive discrimination to help immigrants enter employment faster. Sonja Hämäläinen, Migration Director at the Ministry of Employment and the Economy, also called for more experimental approaches to employment. In her address, Elli Luukkainen, Chair of the Union of Upper Secondary School Students, emphasised the importance of access to employment, training and education, and recreational activities for integration. She said that secondary school students were arranging various leisure time activities for asylum seekers.

Henrik Lax presented a summary of the discussions of the working group on defence cooperation between Finland and Sweden. He said that the discussions clearly showed that the two countries wanted to build defence cooperation without limitations, but that the approach to such cooperation “must be realistic”. According to Lax, the working group regarded the Kultaranta talks as an excellent opportunity for building trust between Finland and Sweden and for gaining a deeper understanding of each others’ thoughts. But, as Lax pointed out, “hopes and expectations can easily be excessive”.

The working group also discussed the coordination of the security policies of Finland and Sweden in areas such as a potential decision on NATO or relations with the United States.

According to Janne Kuusela, Director General at the Finnish Ministry of Defence, defence cooperation between Finland and Sweden is close and pragmatic, but a more precise vision and objectives are needed.

Minister Jaakko Iloniemi noted that “we will not be going home with security guarantees” and said that anyone who had hoped for this as the outcome of the Kultaranta talks would be disappointed.