Etusivu / Kultaranta talks look for answers to the question “How can Finland overcome the challenge?” 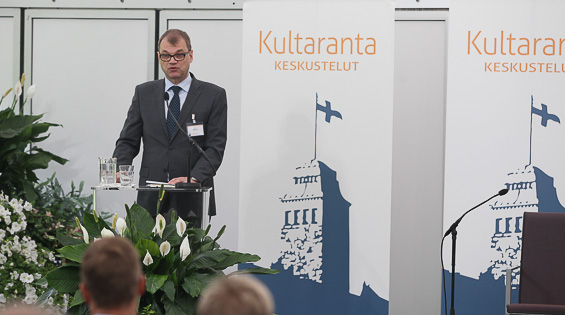 In the second session of the Kultaranta talks on Monday 15 June, the topic was how Finland can rise to the current challenges.

According to Prime Minister Juha Sipilä, who was the first speaker of the day, Finland is one of the world’s best countries to live in. Finland’s strengths include equality, natural resources, a high level of education, and advanced technology. However, we are currently experiencing one of the worst periods in Finland’s economic history with economic development falling short of that in Sweden and Germany.

We must reinvent ourselves, but not solely on the markets’ terms. “If we can reach a consensus, the result will be a fair and just society which builds trust,” Prime Minister Sipilä said.

“The decisions that need to be made are difficult, and each and everyone of us must be ready to compromise,” Prime Minister Sipilä said.  “The Finns are prepared to make tough decisions as long as they are implemented fairly and they contribute to a better future”, the Prime Minister said.

How to stimulate the exports growth rate? 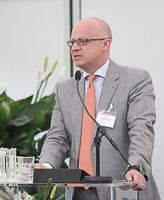 In his presentation, Mr. Pertti Korhonen, President and CEO of Outotec, covered the current situation. “It seems that the gravity of our situation is not fully understood. The facts about Finland’s economy are extremely severe,” Korhonen noted. Industrial exports and investments have collapsed, the number of jobs reduced by a hundred thousand.

“The only solution is simply to steer the private sector–and export sectors, in particular–towards growth, and to decrease public expenditure and the number of jobs in the public sector”. Korhonen sees that the high overall level of expenditure and weak purchasing power are at the core of the problem. “This is due to our extremely high tax rate which in turn is caused by an excessively large and inefficient public sector”.

How to stimulate the exports growth rate? Korhonen asked. It is necessary to develop the prerequisites enabling export operations, to promote entrepreneurship by creating a more flexible operating environment, and to encourage firms to reinvent themselves.

Climate change is a serious threat, and it is necessary to steer global development onto a sustainable path. “Sustainable economy might be the next boost to economic growth.” According to Korhonen, sustainability offers vast opportunities for those alert to the new trends, but is a threat for companies resisting change. Investing in clean technology, circular economy, and digitalisation should be encouraged. 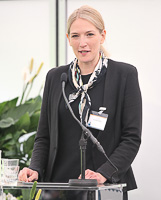 In her presentation, Ms. Tuuli Kaskinen, Operations Director of Demos Helsinki, defined three challenges to the Finnish economy: the globally deteriorating state of the environment and the resulting security risks, the “death valley” of digitalisation, and the fact that Finnish production does not sell.

“Finland’s strengths are significant, and many a world leader would surely like to lead such a competent, skilled and promising nation. Hence, the situation in Finland is not completely impossible,” Kaskinen said. Digital natives are proficient in collaboration, and digitalisation also opens up new possibilities. Finland might actually gain from the development where physical location becomes irrelevant.

Kaskinen rated the building of trust as the most important issue for the future of Finland. “We could build trust by allowing the citizens to become involved in major reforms,” Kaskinen said. “We must return to a Finland where decisions are made together by attentively listening to what others have to say, by having and showing empathy, and by building trust.”

Reforming the educational and innovation systems

According to Ms. Anne Brunila, Professor at the Svenska Handelshögskolan, rising to challenges will require a reform in our educational and innovation systems, in addition to the other necessary operations. According to Brunila, the greatest risk lies in jobs requiring medium-level skills, where the competition is between people and automated systems or robotics. The skills and competences required at work will change in the future, and as the work changes so should the rules.

Adjustments in the public sector are necessary. “In the modern world, learning new things and acquiring new skills must be seen as a life-long process,” Brunila said. She warned that when ill implemented, cuts in the funding of universities and other institutions of higher education will diminish Finland’s potential for success in the global environment.

According to Brunila, our education system is fragmented and overlapping. There are positive examples of structural reform based on efficacy and quality.

As positive examples of taking advantage of the new opportunities Brunila listed the gaming industry, cleantech, health technology, and start-ups. Automatisation and robotics need not necessarily be a threat, but an opportunity!