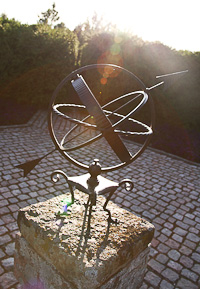 A sun clock in the garden of Kultaranta. Copyright © Office of the President of the Republic

President Niinistö will open the event on the evening of Sunday, 16 June. The opening debate of the second day will focus on Finland’s place on the changing world stage. Introductory speakers will include Minister for Foreign Affairs Erkki Tuomioja, Member of Parliament Juha Sipilä, Director of the Finnish Business and Policy Forum EVA Matti Apunen, Professor Hiski Haukkala from the University of Tampere, and President of The Left Youth of Finland Li Andersson.

After the opening debate the participants will divide into small work groups that will spend the morning discussing the state of Finland’s foreign policy from various perspectives, including values and interests, resources and emphasis, and the future of the EU. The work groups will continue the debate in the afternoon, focusing on cooperation possibilities with Nordic states, the EU and NATO. The leaders of the work groups will summarise the discussions during the closing debate.

The participants invited to the event include around one hundred foreign and security policy experts from various areas of society, including political decision-makers, researchers and representatives of administrations, business life, organisations and the media. The event is being organised in cooperation with the Finnish Institute of International Affairs.

The opening address of the President on Sunday, 16 June as well as the opening and closing debates on Monday, 17 June will be webcast live on the Internet on YLE Areena. The public will also have the opportunity to comment on the discussion and pose questions to the participants: question can be sent by e-mail to kultaranta.kysymykset@fiia.fi, through Facebook from facebook.com/niinisto or via Twitter using #Kultaranta.