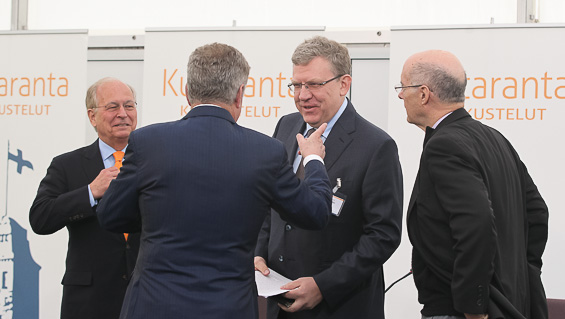 President Niinistö talks with Wolfgang Ischinger (on the left), Aleksei Kudrin and Strobe Talbott before the Monday session begins. Copyright © Office of the President of the Republic of Finland

The topics during the first session of the Kultaranta talks included the current disorder in the world, and turning points in history. This year, for the first time, speakers included international guests – Mr. Wolfgang Ischinger, Chairman of the Munich Security Conference, from Germany, Mr. Alexei Kudrin, Chairman of the Committee of Civil Initiatives, from Russia, and Mr. Strobe Talbott, President of the Brookings Institution, from the United States.

Wolfgang Ischinger started his presentation by observing the unpredictable nature of current affairs. In January of last year, Ischinger consulted experts to decide on which issues to put on the agenda of that year’s Munich Security Conference. No one predicted that what was then seen as a crisis in Ukraine would explode into the single most serious challenge to the European security in the last decades. Also, no one predicted the rise of the Islamic State.

According to Ischinger, there are interlocking crises that play a role: Today, nation states can no longer protect their citizens as they did before.  There is a huge demand for collective global decision making, yet very small supply. “The UN Security Council continues to be blocked in most, if not all, of the current crises.” The development from G7/G8 to G20 goes in the direction of G0. And as Ischinger stated, crises prevention sounds wonderful, but we are still waiting to see the first Nobel Peace Prize awarded for preventing a crisis–the problem is that you can never prove that a crisis has been prevented! Furthermore, the nature of conflict is changing. Today, the threat is coming from the weak, failing states.

Ischinger also drew attention to the fact that if the security architecture in Europe can break down so easily, how much more vulnerable are the security arrangements in other parts of the world?

“We should recommit to reforming global institutions, to making global government institutions more capable of doing their job”, Ischinger proposed, and continued that: “We need to make sure that the Transatlantic relationships remain strong and vibrant. Letting TTIP go down the drain would be a major strategic disaster.” Furthermore, Ischinger suggested that we should think hard about how we can spend our defence euros and pounds more effectively.

Ischinger noted that although there is a great difference of opinion regarding the Ukrainian crisis, in many other respects Russia is a highly constructive partner. Regarding Russia, Ischinger proposes implementing a double strategy: Firstly, we need reassurances and strength within NATO and the European Union. Secondly, we need to signal to Russia that our door is going to be open. “If Russia says “no”, I don’t think we would suffer. I think Russia would only isolate itself even more.”

It is important to reject suspicions of old

According to Mr. Aleksei Kudrin, NATO was unable to clearly formulate its objectives following the Cold War, and therefore, many in Russia view NATO’s expansion as a military threat. Kudrin adds that it is important to remember the historical background, the image of NATO during the Cold War. Actually, in the beginning of 1990s, Russians had great confidence in the western countries and the United States of America, in particular. However, this trust has vaporised due to the events in Kosovo, Iraq, and Ukraine, Kudrin said.

Kudrin reminded that in 2001, the President of the Russian Federation Vladimir Putin considered it possible that Russia might at some point join NATO. Furthermore, President Putin was one of the first to offer support to the US after 9/11. However, the West was not willing to enter into co-operation with Russia as an equal partner, Kudrin said.

According to Kudrin, a wiser and better balanced approach is required of everyone in order to enhance security. The Islamic State ISIL, for example, is a common enemy Russia could oppose together with the western countries. Kudrin further estimated that there are also other areas where there is room for collaboration.

In reference to the Ukrainian crisis, Kudrin emphasised that it is important to implement the Minsk Agreement. He said that Russia is prepared to implement the Agreement, however, the position of Donetsk and Luhansk regions is a difficult and urgent issue.
According to Kudrin, guarantees that NATO would not expand any further would alleviate the tension between the western countries and Russia.

In his presentation, Mr. Strobe Talbott referred to historical turning points and mentioned the CSCE four decades ago as an important example. According to Talbott, after 1985, Russia was moving in a direction that helped the world move in a positive direction. Now history has taken a new turn, and that is why we are having trouble in understanding what is now happening and where it is going. Russia is going back to what was considered a thing of the past.

The Russian leader Mikhail Gorbachev wanted to save the USSR with his reforms which – ironically enough – enabled the breaking apart of the Soviet Union. As a result of this, there is a deep sense of grievance, and some are determined to basically undo consequences of the reforms in the 1980s and in the 1990s, Talbott estimated.

He characterised the current crisis in Ukraine as an ongoing war, and said that it is in the interest of all countries to end that war. According to Talbott, Ukrainian President Petro Poroshenko is willing to take the issue of NATO membership off the table for the foreseeable future. However, it is not acceptable to expect that Ukraine would forgo any plan to ever join NATO. Before Russian’s virtual annexation of parts of Ukraine, public opinion polls showed that the Ukrainian people did not want to join NATO. Thus, in this regard the Russian policy has been counterproductive.

According to Talbott’s estimates, the real danger is in the Baltic states which now have the protection of the security guarantees of membership in NATO. Russia is trying to test how real that security guarantee is, and they may probe too far and touch off a crisis that could be much more than a regional crisis.

Talbott commented on the importance of President Niinistö’s oncoming visit to Moscow. “We in the west should not be in the position of excluding Russia from those mechanisms, organisations, and other arrangements that grew out of what I will call the good 25 years. Let the Russians take on themselves the decision, if they want to pull out.” According to Talbott, we should maintain as much of the structures enabling Russia’s participation in international co-operation. “I believe that if we’re going to have a peaceful, prosperous and successful 21st century, Russia must be part of the solution to the problems we have.” Talbott further said that he thinks that if Russia is involved, we are much more likely to have a good 21st century.

Russian’s partnership with China and other developing economies came up in the discussions. According to Kudrin, this is a natural development as EU is seeking energy independence from Russia. There are interesting growing economies located around Russia. According to Kudrin’s estimate, a balance between the east and the west will very likely be established in the future. Russia has not turned its back on the western countries. It is merely that there is faster growing trade in other directions.