Home / New Year’s Speech: Peace, democracy and wellbeing at the core of the EU 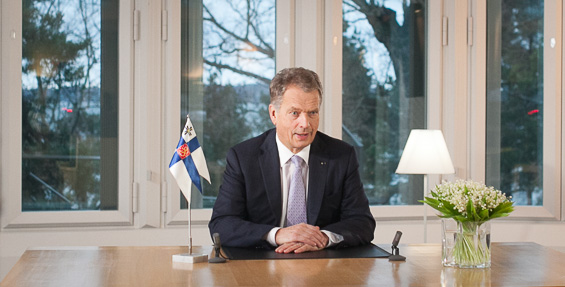 ”We must be honest about why the EU exists. We must remember that peace, democracy and wellbeing – in a nutshell, the freedom and stability of a person’s life lie at the very core of the Union”, President of the Republic Sauli Niinistö said in his New Year’s speech on 1 January 2014. ”This core must be treasured. It cannot be left in the shadow of big bureaucracy or the special interests of an individual member state.”

The First World War redrew our continent’s borders and an independent Finland also rose out of this turmoil. ”We have good reason to remember our history. Finland’s place has always been as a part of Europe. Our fate cannot be separated from Europe’s fate.”

In his speech, President Niinistö spoke about the financial crisis in Europe. To resolve this situation, some have proposed greater cooperation on shared economic policies, while others have suggested increased mutual responsibility. ”Both are major issues. A structure based on complete joint liability is an extreme form of federalism – and that must be clearly stated, too”, the President said.

Discussion is a guarantee of democracy

”Like me, many have wondered how much trouble could have been avoided if the original stability and growth pact had been adhered to. That leads us to a third major issue. How to ensure that governments and their successors adhere to what has now been agreed on and what will be agreed on. Finland has highlighted our own approach to managing our economy and it should continue to do so. To its credit, Finland has also highlighted creditors’ responsibilities. Market forces must also bear responsibility, by doing so they will also become guarantors to the implementation of agreements.

President Niinistö encouraged an honest debate. The EU elections this spring will forge Finland’s future, he said. ”We Finns must also be honest. I am; the European road is our road. It is Finland’s road. But we must know precisely – and also influence – where that road is taking us.”

Discussion is also a guarantee of democracy. If any individual in a democracy pursues his cause thru violence – in word or deed – it is violence against all. “Democracy is not furthered by wearing a mask. Democracy has channels for being heard – channels that are listened to.”

Last summer at the Kultaranta Talks, the Finnish foreign policy was weighed in a new way. ”It was an invigorating debate, yet the most rewarding aspect was finding the patience to hear – and actually listen – to what others had to say. And I’m looking forward to more of this in the future, as the most difficult question remains unanswered: how can the world – and Finland – act in a sustainable manner with regard to the environment, society and the economy?”

The world is changing and these changes challenge us all the time, the President said. We must constantly ask ourselves new questions and question established theses. ”How can we alleviate human suffering and resolve conflicts? The tragedy in Syria continues and there is distress in Central Africa, yet we must not let ourselves become numb and merely observe the fact.”

Finland has a stable foundation

In the world, wealth is being distributed and concentrated in a new way. ”This means that while many are no longer starving, the opulence of the few has reached new proportions. A new middle class has emerged in many places where there has previously been none. This trend has accelerated growth and has stabilised many societies”, President Niinistö said. ”The old middle classes have encountered a new competitor. All Western countries, including Finland, will have to respond to this pressure.”

The technological revolution has lead to an upheaval in industry and many traditional tasks and professions are disappearing. According to President Niinistö, Finland possesses clear strengths and a stable foundation: a highly educated population that has trust in democracy, the rule of law and equality.

”A light breeze will not bend us and a strong wind will not break us”, the President said. ”Our society is not flawless, but it is still strong.”

Everyone has something to give

We must make decisions. ”In order to create something new we must partly demolish the old, even some things we thought were permanent. We must also trust each other and ourselves. In this spirit of trust, we can aspire something new.”

“Finland has always performed well under pressure. Forces have been gathered and directed toward the future. Finland needs everyone – those who were born here and those who have moved here. Everyone has something to give.”