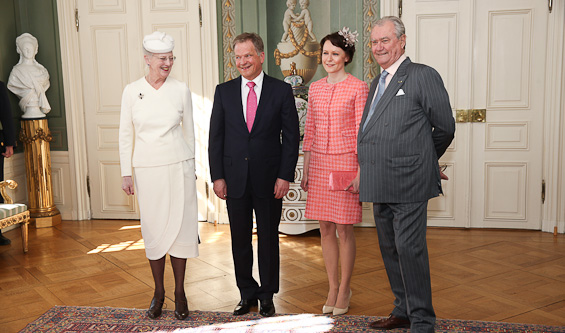 President of the Republic Sauli Niinistö and his spouse Jenni Haukio made a state visit to Denmark on 4–5 April. The visit involved discussions about bilateral relations between Finland and Denmark and potential for business cooperation particularly in the area of environmental technology. The discussions also focused on Nordic cooperation, current EU affairs and Arctic issues.

The state visit began with a formal welcoming ceremony attended by Her Majesty Queen Margrethe II and His Royal Highness Prince Henrik at Copenhagen Airport on Thursday 4 April. Further formalities took place at Fredensborg Castle. In the afternoon, there were a high-level discussion organised by Danish industrial association Dansk Industri in which the delegation of Finnish business leaders participated. This was followed by visits to enterprises in the cleantech sector. The day concluded with a banquet given by Her Majesty the Queen and the Prince Consort at Fredensborg Castle.

The second day of the visit, 5 April, featured discussions with Danish political leaders. President Niinistö first met Mogens Lykketoft, Speaker of the Folketing, and then discussed with Prime Minister Helle Thorning-Schmidt. The Finnish delegation  nclude Erkki Tuomioja, Minister for Foreign Affairs. The afternoon programme featured a harbour cruise in Copenhagen including an introduction to the city’s environmental solutions. The visit concluded with a dinner given by the President and his spouse for their hosts.

Mrs Jenni Haukio, the spouse of the President of the Republic, had a separate programme in Copenhagen focusing on culture and design. She visited Designmuseum Danmark to open an exhibition of works by Kaj Frank and the Odrupgaard Museum to view an exhibition of photos by Finnish photographer Nelli Palomäki. The programme further included a visit to the Holmen district with Her Royal Highness Princess Mary and a visit to the historical Royal Copenhagen china shop.

President Niinistö and his spouse travelled directly to China from Denmark for an official visit from 6 to 10 April.