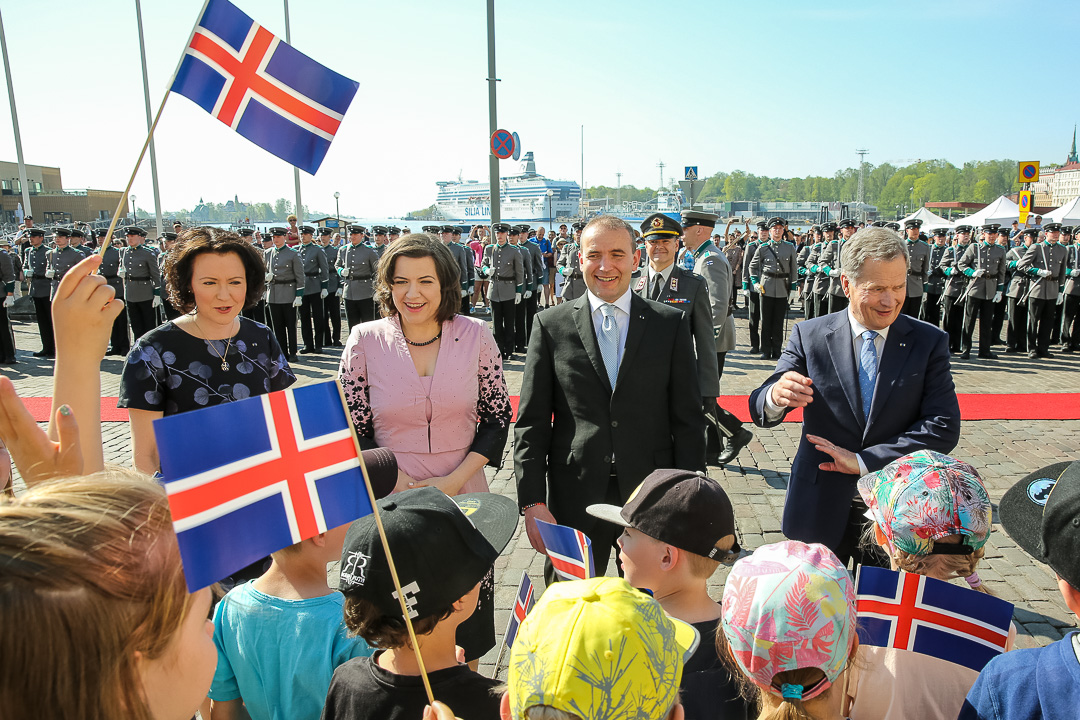 Caption: Children greeting the Icelandic presidential couple with flags. Photo: Juhani Kandell/Office of the President of the Republic of Finland

Finland currently holds the Chairmanship of the Arctic Council and will be succeeded by Iceland. “Finland has highlighted the importance of restricting black carbon emissions in the Arctic region. I have often said that if we lose the Arctic, we lose the globe,” President Niinistö stated in a press conference after the discussions.

President Niinistö said that the administrations of the two countries are working very closely together and helping each other due to the successive chairmanships: “You have raised the issue of sea pollution and especially plastic waste. We wish you all the best in tackling that problem and we are willing to help.”

Equality is the recipe for success

On 15 May, President Jóhannesson met with the Speaker of the Finnish Parliament, Paula Risikko, and the Prime Minister of Finland, Juha Sipilä. The day was concluded with a gala dinner hosted by President Niinistö and Mrs Jenni Haukio at the Presidential Palace.

On Wednesday 16 May, the Presidents visited the icebreaker Urho where they attended a roundtable discussion on Arctic matters.

The discussions focussed on the global significance of the Arctic region. President Niinistö noted the importance of being ready for the increasing interest in Arctic matters outside the eight Arctic Council Member States. The President emphasised that environmental protection is the most important theme concerning the Arctic region. Concrete progress is more important than words. The Arctic Council has a leading role in promoting this hands-on cooperation.

Other speakers also noted the importance of peace in the region and that the region’s development must be sustainable. The region’s ice extent is only half of what it used to be 50 years ago. Plastic debris, which Iceland has chosen as a central theme for its Chairmanship, also poses a threat to the Arctic region.

After the discussions, the Presidents were given a tour around the icebreaker Urho while  Timo Aaltonen, Master of icebreaker, told them about the operation and history of the icebreaker.

President Guðni Th. Jóhannesson also participated in a seminar organised by the Confederation of Finnish Industries and the Federation of Icelandic Industries, gave a lecture at the University of Helsinki and visited the Me & MyCity learning environment. In the evening, the Icelandic presidential couple hosted a reception at the Finlandia Hall in Helsinki.

President Niinistö visited Iceland in autumn 2014 and made a state visit there in May 2013. 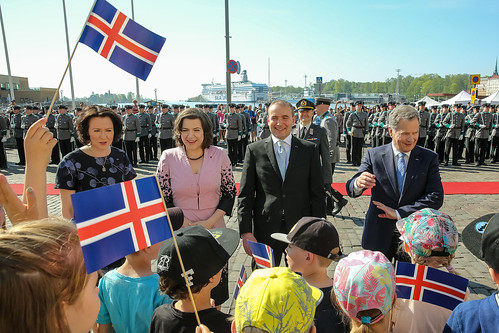