Home / President Jóhannesson of Iceland as a guest of President Niinistö: Common objectives on the Arctic Council 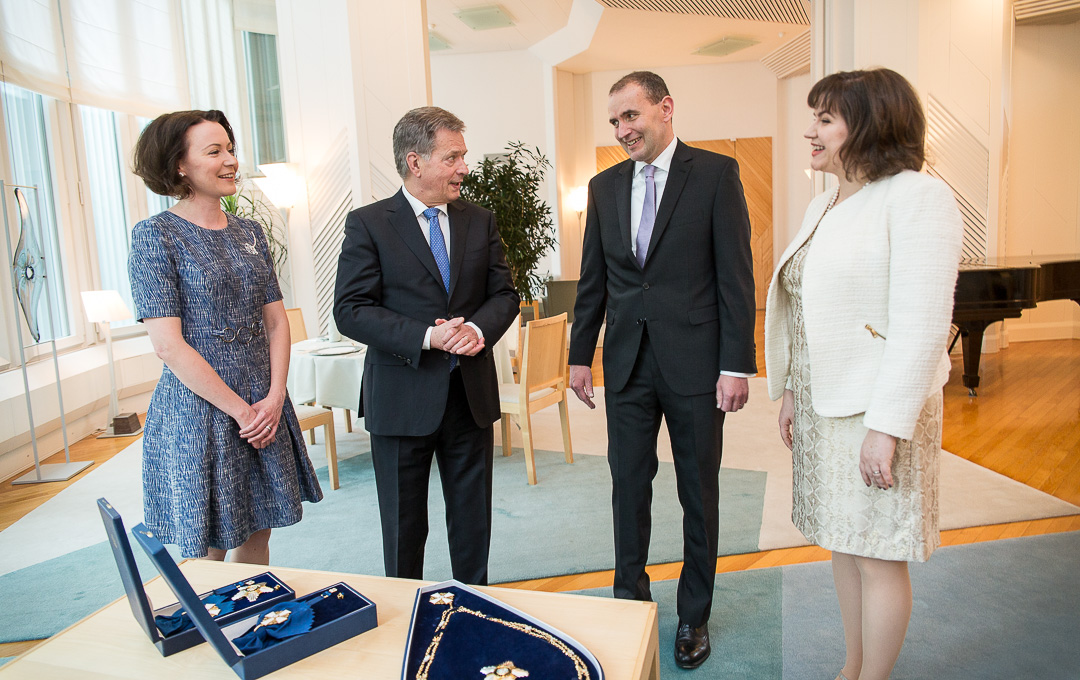 President of Iceland Guðni Thorlacius Jóhannesson and his spouse Eliza Jean Reid met with President of the Republic Sauli Niinistö and Mrs Jenni Haukio at Mäntyniemi on 31 May 2017. This is Mr Jóhannesson’s first visit to Finland as president. At a press conference held after their discussions, the presidents characterised relations between Finland and Iceland as excellent. “We have excellent bilateral relations. It is difficult to improve something that is already perfect,” said President Niinistö. Both presidents stressed cooperation, particularly regarding the Arctic region.

“We have a joint mission on the Arctic Council. Finland will be the Chairman over the next two years, after which it will be succeeded by Iceland. It is crucial that we keep in close contact and jointly plan which issues we want to promote,” emphasised President Niinistö. He expressed his belief that the convergence between economic interests and environmental considerations will assume an even more prominent role in activities in the Arctic region: “We need to meet this challenge and strike a balance in the relationship between these issues,” he said. President Jóhannesson was of the same opinion. “The activities in question must be sustainable over the long term. All of the Nordic countries agree on this,” he stated.

The security situation in the Baltic Sea

The presidents also discussed the security situation in the Baltic Sea area. President Niinistö referred to the meeting of the International Civil Aviation Organization, the ICAO, currently under way in Helsinki, whose agenda includes improving flight safety. “I hope that we see positive developments in terms of flight safety. It is possible that Russia and NATO will take small steps towards improving security in our region,” President Niinistö commented. President Jóhannesson emphasised the importance of dialogue with Russia. He stated that discussion channels must be kept open.

The Icelandic presidential couple is on a two-day visit to Finland; on Thursday 1 June they will participate in a visit by the Nordic heads of state in celebration of the centenary of Finnish independence. The meeting between the presidents was the second within a short period. The first was at the 2017 Arctic Forum held in Arkhangelsk, Russia, in March of this year. President Niinistö also invited President Johannesson to make a state visit to Finland next year.

Former President Ólafur Ragnar Grímsson visited Finland in 2012. President Niinistö last visited Iceland in the autumn of 2014 and made a state visit there in May 2013. On the present occasion, Presidents Niinistö and Jóhannesson met for the second time.