Home / President Niinistö: A united Finland is a competitiveness trump card for the country 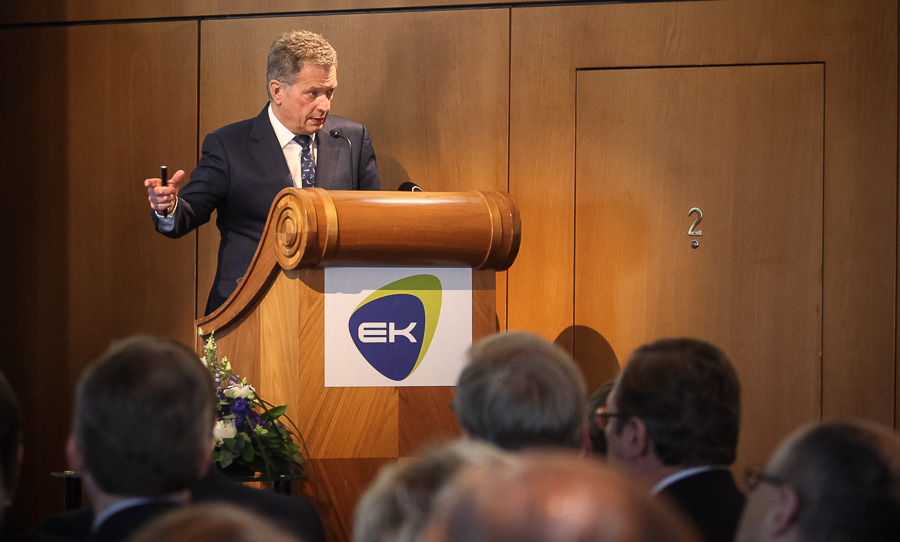 “A united Finland is one of the nation’s competitiveness trump cards,” declared President of the Republic Sauli Niinistö to the spring seminar of the Confederation of Finnish Industries on Wednesday 20 May. “The word ‘united’ is, I firmly believe, strongly to the fore in the government negotiations. I hope that it is also high on your agenda,” said President Niinistö to the economic decision-makers attending the seminar.

If we are to remain united, we will need to exercise restraint and, to some extent, be prepared to make sacrifices. “We also need to be ready to set an example,” the President added.

According to the President, the government negotiations have ‘grabbed the bull by the horns’ with more resolve than at any other time since the turn of the millennium. “Let us hope that the participants retain their firm hold. This is the ardent wish of all of us.”

In his speech, President Niinistö made broad references to geopolitics, economic development and globalisation. “Only a short time ago it was believed that a world of mutual dependencies mattered more than traditional international relations,” said the President.

“Accordingly, we believed that mutual trade, investment and close economic relations were bringing nations closer together. In other words, that such factors were peacemakers.” President Niinistö recalled his own comment that ‘the Third World War is being fought not with weapons but through the market economy.’

“It now looks as though these ideas have utterly failed to come to fruition,” the President stated. “We are now in a situation where we can say that geopolitics is back. Whereas it was imagined 20 years ago that the economy steered geopolitics, geopolitics is now driving the economy.”

The European situation has also changed radically in the last ten years. “Europe cannot even dream of expansionism based on exporting its own values – we are now on the back foot, trying to defend our values from external influences. This too represents a huge change. If we add the full implications of hybrid warfare to the mix, then it is clear that we are in a completely different situation.”

President Niinistö pointed out that, instead of unifying, the world was forming into geoopolitical groupings, such as the BRICS countries, the Shanghai Cooperation Organisation, the parties to the TTIP agreement and the oil producers. All of these clearly have an economic and a geopolitical basis. The President also stated that growth in protectionism and a more nationalistic emphasis lay behind these phenomena.

In his speech, President Niinistö also referred to climate change, the mitigation of which could unite people while engendering new know-how in cleantech. “When enough people can see enough worrying signs that the climate is changing, we can say that our common enemy has stepped out of the shadows.”