Home / President Niinistö addresses ambassadors: “Developments in Finland’s internal situation will have a decisive influence on our national security” 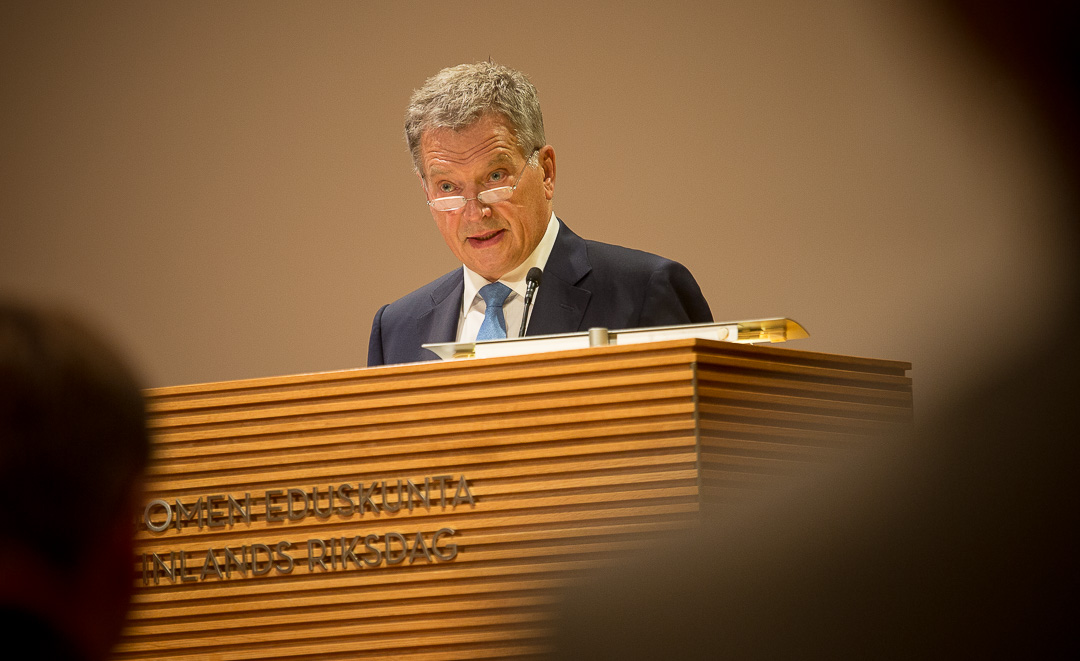 President Niinistö gave a speech the Ambassador Seminar. Photo: Matti Porre/Office of the President of the Republic of Finland

On 23 August, President of the Republic Sauli Niinistö gave a speech at the ambassador seminar held in the Finnish Parliament Annex. He began his speech by stating that foreign policy must involve acknowledging the dangers and opportunities present in our time, as well as looking further ahead and afield. In this context, the President referred to the foundations of Finland’s security, which stands on four pillars: 1) national defence and security 2) western integration and partnerships 3) the international system and comprehensive security and 4) well-functioning relations with Russia. The President pointed out that all four pillars require constant care, i.e. an active policy aimed at maintaining stability, even if development is also dependent on events on the international scene.

As an example of such activity, President Niinistö referred to the mutual concerns about flight safety in the Baltic Sea area. Like many other actors, the President has drawn the attention of Finland’s Russian and Western partners to this issue: “The finger has been pointed at the Russians in particular with respect to dark flights.  In light of this the rational conclusion was to take up the issue with Russia. If this is now viewed as being negative or confusing, that is because some other line of reasoning is behind it,” said President Niinistö.

All member states and citizens must be kept on board

Among world events, the President also referred to the rapprochement between Turkey and Russia: ”[This] represents a major geopolitical change. While it does not necessarily amount to a stable alliance, even a tactical rapprochement poses new challenges to western actors,” he stated. President Niinistö said that recent events in Turkey are raising legitimate concerns and it would not be in our interests for Turkey to spurn democracy and its EU partnership.

In his speech, President Niinistö also discussed other concerns within the European Union, such as the British people’s vote in favour of leaving the EU. He did not believe that the Brexit vote posed an existential threat to the Union, but said that it was a serious blow: “One of the strong messages is that people throughout the EU often have little trust even in their own leaders (…) If it is allowed to worsen, it will become a genuine threat to the Union and thereby to all of us.” The President stated that the problem posed for the EU is ultimately political. The implementation of decisions too often results in no more than good intentions and citizens are losing trust in the Union. He added that the EU should now have the patience to direct its attention back to the basics: “Instead of ambitious, new plans, it would be more relevant to focus on the essential, go back to basics and ensure that all member states and their citizens feel that the European Union brings an element of stability to their lives,” the President said, and reminded his audience that citizens wanted an EU that was a creator and guarantor of peace and stability. The same issue was emphasised in the Government’s foreign and security policy report approved in the early summer, which discussed the strengthening of the Union as a security community.

Police and intelligence cooperation to be deepened

We should also explore what we can do to resolve the problem of terrorism: “Terrorism (..) always grows out of a particular social and political setting. We must carefully identify and analyse these underlying factors,” said the President, adding that security and basic rights should not be set against each other. However, the choices will become more difficult the longer we delay addressing the problem of terrorism and its root causes: “The phenomenon of terrorism affects us all, including Finns in one way or another. The question is, what can we do about terrorism. There are means, but do we have the will to use them? Cooperation between the police and intelligence services must be deepened in order to prevent acts of terrorism. We must also develop our anti-terrorism tools. This too is to be covered by Finland’s forthcoming new legislation on intelligence activities,” said the President, reminding his audience that terrorism is not solely threatening Europe and its values: “On the contrary, regardless of where it occurs terrorism is a global scourge and a crime against life and humanity.”

Finland is an exceptionally safe, peaceful and developed country

The condition of Finland’s own national pillar is a key guarantor of its own security. A credible defence is not only a threshold and deterrent against intruders, but also a strong incentive for partnership. However, security cannot be built on weapons only – Finland’s social solidarity and everyday security for citizens is another important constituent of our national pillar. The President cited a number of international comparisons which demonstrate that Finland is one of the world’s most stable, most advanced and safest countries.

Finland is also among the top countries in terms of human development, low levels of corruption and media freedom. “The fruits of economic success have been shared reasonably fairly and the entire nation has benefited. The resulting social solidarity is a great achievement by Finland and its people and is a major strength in terms of resisting hybrid and information-based forms of influence,” said the President, who went on to warn that the same solidarity was under pressure. A report titled “Kenen mitta on täysi?” (“Who’s had their fill?”) by the E2 think-tank reveals that a large number of citizens are dissatisfied, feel insecure and are concerned about growing inequality in Finland. “Many feel that even their own hard work no longer guarantees a living and that our democracy is dysfunctional. Finland is dividing into a nation of winners who are content with life and their country and to those who are dissatisfied and disappointed,” he said.

Particular attention should be paid to the young. While most young people are doing well, it is a cause for concern that up to a third have problems in finding secondary education and making the transition from training to work. In addition, more and more young people feel marginalised from Finnish society. The president made the following comment on this divide: “Discontent is part of democracy. What is essential is where and how it is channelled, and by what kinds of leaders.” It is also essential to foster social solidarity: “Finnish society remains stable and functional, in spite of some tensions. Many things are going well. However, there are no grounds for complacency. Developments in Finland’s internal situation will also have a decisive influence on our national security.” 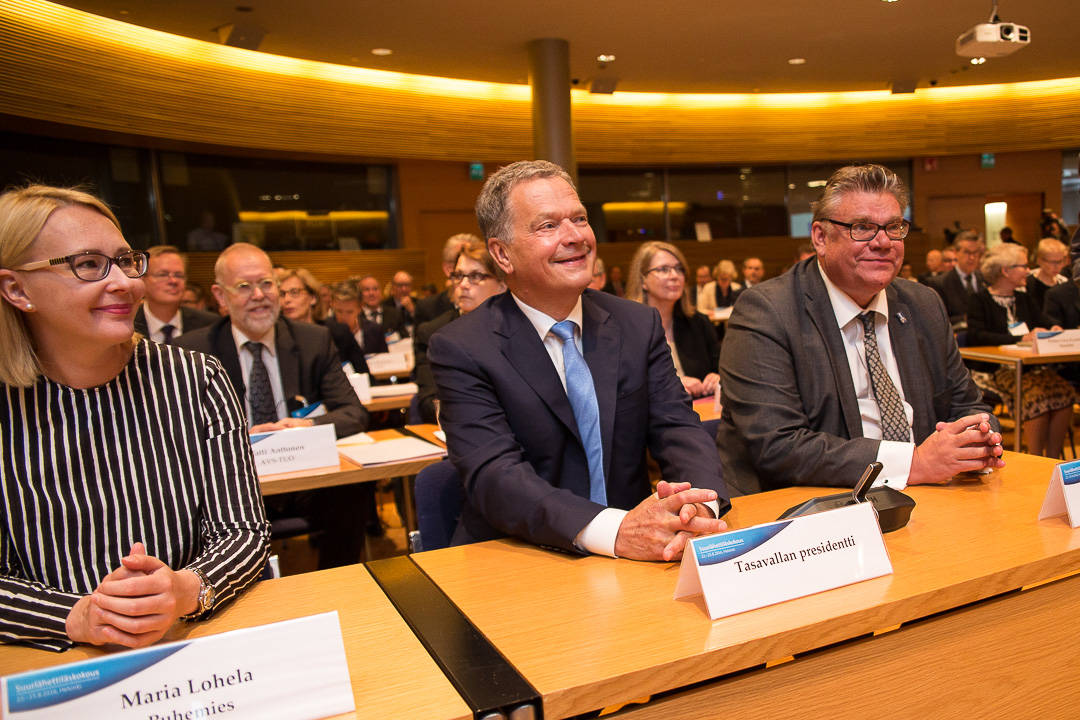 Speaker of the Parliament Maria Lohela, President Niinistö and Minister for Foreign Affairs Timo Soini at the Ambassador Seminar on 23 August. Photo: Matti Porre/Office of the President of the Republic of Finland