Home / President Niinistö addresses ambassadors: Europe is now in the midst of its own years of danger 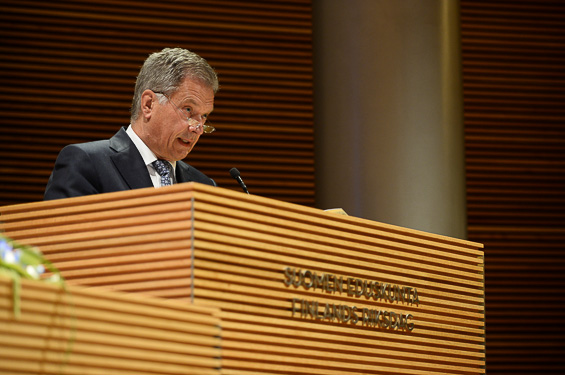 “Europe is now in the midst of its own years of danger. An arc of instability and violence stretching from Ukraine to the Middle East and North Africa lies on its fringes”, said President of the Republic Sauli Niinistö in the Finnish Parliament Annex on 25 August. “[T]he international system is now undergoing a profound transformation marked by major uncertainty and accumulating problems”, he added. “At the same time, Europe is in a period of internal flux, of which the Greek debt crisis and its management is one, but not the only, sign”.

In his speech to the heads of Finland’s diplomatic missions abroad, the President referred to issues such as the Ukraine conflict, international terrorism, immigration and the key pillars of Finland’s security and defence policy.

The confrontation between the west and Russia

President Niinistö stated that the implementation of the Minsk Agreements would clear a path to ending military activities and pacifying the situation. It should also be noted that a wider confrontation between the west and Russia underlies the Ukraine conflict. “For the west, principles and rules are the key issue. Will Europe’s mutually agreed security principles and rules hold?” asked the President. “For Russia, the self-same crisis is perhaps about geopolitics and the balance of power. Of course, it is natural that we view the issue from our own starting points. But so too do the Russians. Herein may lie the basic problem. “

On the southern reaches of the arc of instability and violence – in the Middle East – the very structures that held the region together have given way, leading to a catastrophe. ” The world has witnessed horrors such as the brutal terrorism of ISIS, which seems to be systematically directed at women and children as well as men”, the President said. However, the fight against terrorism and ISIS has brought the United States and Russia into closer, communicative contact with each other. “Finland is fulfilling its responsibilities on her own part by participating in the international coalition’s training mission in Erbil.”

Moderation and sound judgement in facing the immigration challenge

President Niinistö believes that huge-scale, rapidly growing is a phenomenon partly caused by the prevailing instability. “Both the oppressed and those simply seeking a better life are being drawn to Europe. We are conflicted on this issue. As a civilised, humane people, we are honour-bound to help these migrants. On the other hand, we are aware that the unstable situation in the Middle East and Africa cannot be resolved by moving more and more people to Europe. We are approaching the limits of our capacity for this, even if these limits are somewhat different for different countries. “

The President pointed out that failure to deal with this problem will have serious consequences in Europe. “We need an open discussion and a clear and credible, effective policy which has the support of the majority of the people. We need to decide on the direction in which we want to take this issue. Should we help people here or abroad?” President Niinistö comment that we will be better able to respond to the immigration challenge if we keep our heads and take a moderate approach.

The key line of defence lies between the ears of Finns

President Niinistö told the ambassadors that, in pursuit of our national security, we need continual evaluation and practical steps. “After all, as I stated at the beginning of this speech, we probably face a long period of uncertainty and risk. Despite our global obligations, we are unconditionally and primarily responsible for our own country and its future. “

Finland’s security is a holistic entity, resting on several pillars. ” These pillars are national defence and security, western integration, relations with Russia, and the international system, particularly its structure, rule-based nature and manageability. These pillars are ever-changing – they are weakened or strengthened by events. They also continually interact. The more pillars on which we rest, the stronger they are from our viewpoint, and the better the balance between them the stronger a position Finland is in. “

“We need to strengthen and modernise our defences. The same is true of our internal security and intelligence capabilities,” commented President Niinistö. “Our key line of defence always lies between the ears of Finns. Each and every Finn is a defender of his or her country.”

“In addition to national and regional concerns, we are being confronted with challenges – such as climate change – which supersede all others. While giving primacy to resolving issues that affect us in particular, we also need to participate in finding solutions to problems that affect everyone.” 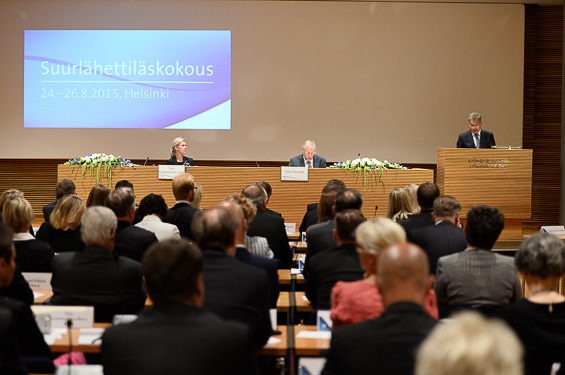