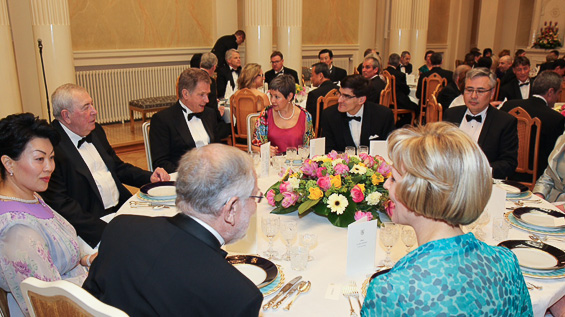 President of the Republic Sauli Niinistö points out that, in addition to the Ukraine conflict, Europe has had a rough awakening to a growing crisis in the South. “We are surrounded by an arc of conflict. Violent clashes in North Africa and the Middle East have led to regional catastrophes whose consequences are rippling out into Europe,” said President Niinistö in an address given at a diplomatic dinner, held for the heads of foreign embassies, at the Presidential Palace on 23 April.

The President stated that new thinking is required and Europe must take more responsibility for its own security. “This means that rather than merely wondering how to export its values and models of governance, Europe must also consider how to defend them at home. The situation is now much more complex and the certainties of the 1990s are behind us. “

Gulf between the EU and Russia

The President expressed his concern about the widening gulf between the EU and Russia. Principles and values are at stake as well as various interests. “Relations between the EU and Russia were in difficulties even before the Ukraine crisis, based on new positions in which we engaged in a dialogue of the deaf, or interpreted events from opposing standpoints. Our basic perspectives were already diverging. In the West, many saw Russia as being on a path of convergence with the West. However, Russia may have changed its idea of where it was going mid-journey. “

It is doubtful that this situation can be turned around quickly, but now is the time for cool-headed analysis and thinking, and the step-by-step diplomacy that follows, said the President. Containing and resolving the Ukraine conflict represent the first step in this process. The crisis must not be allowed to spill over into new areas and sectors.  “I think that this involves areas such as contacts between citizens and Arctic cooperation, which cover a range of common interests. Although there can be no return to normal, this does not mean that we should continue moving towards an abnormal situation without stopping to look at what is going on around us.”

“Thirdly, I also regard it as important that, in a responsible fashion, we keep our communication channels open with Russia’s leadership. During times of crisis – especially during such times – we have to keep talking. However, at EU level we need to ensure that this does not undermine the EU’s solidarity or the credibility of joint decisions.”

Kultaranta talks to be held again in the summer

In his speech, President Niinistö also referred to the general election just held in Finland. “The result was just as Finland’s voting public wished”, the President said. “Despite differences of opinion, this emphasises joint responsibility and calls for cooperation and trust. These will all be needed.”

The President also pointed out that the election had involved a lively debate on foreign and security policy.  “No one, whether inside or outside Finland, can suppress such discussion. We have freedom of speech, leading to a broad range of analyses and conclusions. Under all circumstances, a responsible government will agree on a common policy and act accordingly. If necessary, such a policy can be adjusted – together.”

The national foreign policy discussion will continue. “That is why we will again hold the Kultaranta talks in mid-June. At those talks, we will discuss broader international themes and our national security.”

The third Kultaranta talks will be held at the President’s summer residence in Naantali from 14 June to 15 June 2015.