Home / President Niinistö addresses Parliament: Migration poses a challenge to the values of Finland and the West 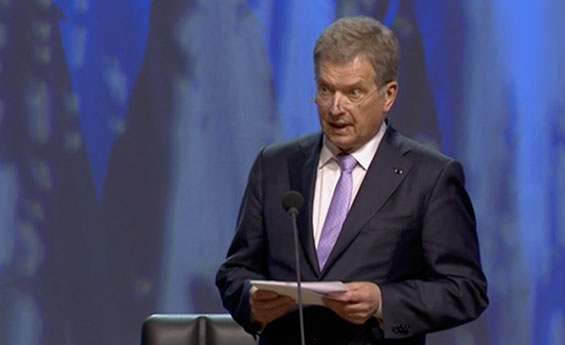 President Niinistö opened the new session of Parliament at Finlandia Hall: On behalf of Parliament, Maria Lohela, the Speaker of the Finnish Parliament, responded to the speech given by the President of the Republic.

President of the Republic Sauli Niinistö opened the new session of Parliament in Finlandia Hall on Wednesday 3 February 2016. In his speech to Parliament, the President focused on the migration directed towards Finland and Europe. The President stated that this presented a challenge to western ideas: “Just a few years ago we were exporting our values and regarded them as unquestionable, now we are having to consider whether even we ourselves can preserve them.”

The President pointed out that Europe could not withstand uncontrolled migration for much longer and that values will give way if our capacity to cope is exceeded. However, slowing down of migration would be difficult, since almost all measures might be viewed as being in breach of international law and agreements. On the other hand, such agreements and rules had evolved in very different circumstances. ” I feel sure that if these international regulations, and the national regulations based on them, were drawn up now, their content would be fundamentally more stringent, while still taking account of human rights and helping those in need.”

The President said that there are no good options. A balance has to be struck which both preserves the value base and order in Europe, while helping those in distress or who are being persecuted. “Europe is still seeking a balanced solution to the problem. Many governments are acting unilaterally, pursuing their own narrow interests or engaging in a display of defiance while issuing threats. At some point, someone has to recognise that, here and now, we cannot fulfil all of our obligations under international agreements. Most of the national proposals put forward are based on this realisation.”

President Niinistö considered it best that a decision be reached at EU level. “It would be best to face facts, and best of all for the EU to do so and embark on the joint control of our borders, the slowing down of migration and the acceleration of deportations, thereby creating a safe space for those in the worst distress.

Turning on each other will only increase our problems

In his speech, the President also gave his view on the dialogue that occurred in Finland in early 2016, in which men, women, the tolerant, the intolerant and the police have been targets of verbal abuse. President Niinistö pointed out that problems are worsened, not solved, by this approach. He reminded his audience that, in international comparisons, Finland is doing well and repeated his earlier warning that we must not enter the spring at odds with one another – whether in relation to the economy or immigration.

He rounded off his speech by affirming that much was now expected and demanded of MPs, including with respect to the constitution. “We need greater security, immigration is a problem, our economy is under duress and unseen problems may lie ahead. On a deeper level than has been expected of Parliament for decades, you will be asked to wrestle with fundamental, constitutional issues.  Your work will not be free of pain. President Ståhlberg’s desk, where our constitution was drawn up, can be found on the upper level of the main Parliament building. There lies a message in that scene: Here is where the constitution was created and has stood the test of time and the accompanying changes.