Home / President Niinistö after meeting with Putin: Ceasefire requires trust and action also on the part of Russia 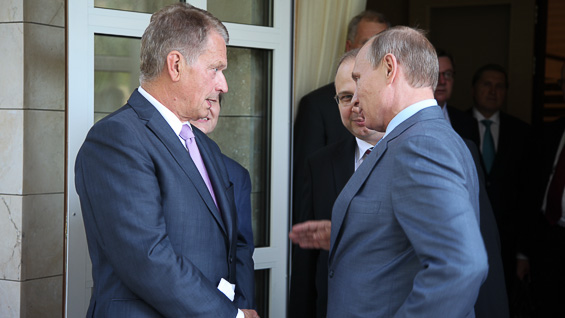 During his working visit to Sochi, Russia, President of the Republic Sauli Niinistö met with President of Russia Vladimir Putin on Friday 15 August 2014. The main topic of conversation was the Ukrainian crisis. After the discussion, the presidents gave statements to the media.

President Niinistö said he had emphasised the importance of mutual trust and the suspension of hostilities: ““In order to silence the guns, trust and action is required also on the part of Russia. No weapons can cross the border.”

The President also stressed the importance of humanitarian aid reaching the area, and noted with satisfaction that Russia, Ukraine and the International Red Cross had reached an understanding on the matter. ”I hope this means that achieving mutual trust between the parties is possible, since that is what is needed for the next step, which should be a ceasefire.”

The President had the following thoughts on Finland’s potential role in resolving the crisis in Ukraine: “Finland has always been ready to offer its services, and will be ready to do so also in the future if it will help advance matters.”

President Niinistö described the tone of the discussion with President Putin as open and constructive.

From Sochi, President Niinistö travelled to the Ukrainian capital, Kiev, where he will meet with President of Ukraine Petro Poroshenko on Saturday.