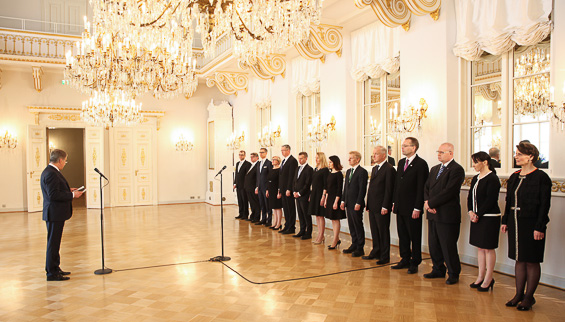 Photo: Office of the President of the Republic.

President of the Republic Sauli Niinistö appointed the new Government on Friday 29 May 2015. Led by Prime Minister Juha Sipilä, the Government is Finland’s 74th.
“Your key task is to change Finland’s course,” President Niinistö declared to the new Government, which was addressed by him at the Presidential Palace. “We have imagined for too long that good things come by simply carrying on as before. Now we know that patching up old policies only buys time at best. That is why we need bold new measures to help turn Finland around.”

The President added his voice to the Prime Minister’s call for a united front based on self-restraint. “I hope that the message gets through and is taken to heart. The well off have to realise that we fare even better when no one is badly off. We now need the power of example.”

President Niinistö viewed turning the economy around as the new Government’s most difficult challenge. “You will hear a great deal about what you shouldn’t do, less about what you should do, and nothing about where we would be if nothing were done. However, I don’t think that anyone will dare, any longer, to suggest that we should live on credit with no concern for the future.”

The President stated that the new Government Programme would not introduce major changes in foreign and security policy. “Continuity is certainly important, but we also need to change with the times and developments taking place around us.  It is therefore good that the programme includes a focus on securing our defensive capabilities and aims to provide an internal basis for external security,” said the President.

Expectations exceeded what was possible

The outgoing Government of Alexander Stubb visited the Presidential Palace prior to the formation of the new Government. President Niinistö stated that high expectations had been placed on this short Government term. “During the formation of your Government, I drew your attention to an awkward double challenge: major, broad-ranging proposals were partly ready, but in public it appeared that they simply needed to be “formalised”. However, an old political truth reasserted itself: nothing is resolved until Parliament has had its final say on the matter,” said President Niinistö.

The President saw an imbalance between expectations and what was possible which overshadowed the Government’s achievements, such as the resolution of pensions policy, the jobs saved in shipbuilding and the handling of the Ukraine crisis, in which Finland acted consistently and decisively in changing circumstances.

The President also referred to the discussion on whether the Government should stand down, and speculated that this might not have led to the dissolution of Parliament. “I believe that a mid-term change of Government due to the political situation, or circumstances and presumed developments, would not have dealt a blow to our stable parliamentarianism. If you find a combination that enjoys the confidence of Parliament, that forms a basis on which you can continue working.”