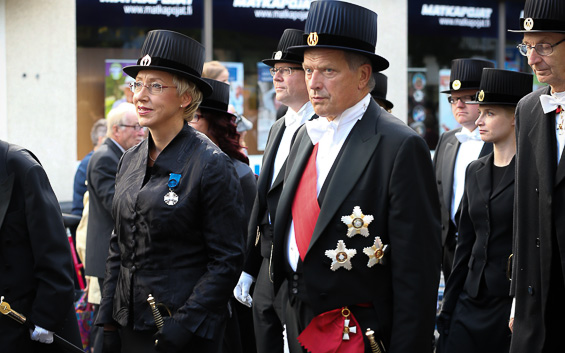 “Finland should create a diverse education export product, bringing together Finnish expertise in a number of fields,” said President of the Republic Sauli Niinistö in his speech at the conferment ceremony banquet at the University of Jyväskylä on Saturday 24 August. The degree of Doctor of Sports and Health Sciences h.c. was conferred upon President Niinistö at the joint master and doctoral conferment ceremony of all faculties.

“Uno Cygnaeus had a vision in founding the Jyväskylä Seminary in 1863. A high level of competence among teachers has been the cornerstone of our school system ever since," said the President, referring to the 150th anniversary of the University. “Over the decades, the teacher seminary has evolved into a multi-discipline, international and profitable university that has a high profile and considerable influence while also being a major employer.”

“The success of a nation is no longer measured by budget balance or international influence. What is becoming increasingly relevant is the educational attainment of her people,” said President Niinistö. The Finnish school system is of interest abroad, and we should grasp this interest with enthusiasm.

Education exports will help us to promote Finnish values in a concrete way. “Education reinforces the capacity of the population to participate in and influence their own local community. This serves to reinforce the civil society, democracy and human rights.”

President Niinistö pointed out that exporting education cannot be done with a top-down attitude. It requires a sensitive ear, determination to achieve progress and close cooperation between the actors involved.

Cooperation more important than ever

This was the eighth joint conferment ceremony of all faculties at the University of Jyväskylä, with 209 recipients of master’s degrees and 161 recipients of doctorates. The total number of participants was greater than ever, at about 1,000. Honorary doctorates were conferred to fourteen opinion leaders and distinguished scientists in addition to the President of the Republic.