Home / President Niinistö at meeting with political journalists: “We are moving to a more European NATO”

President of the Republic of Finland Sauli Niinistö met with representatives of the Finnish Association of Political Journalists on Thursday, 15 September 2022 in the Presidential Palace. In his opening speech, President Niinistö addressed the war situation in Ukraine, Finland’s NATO membership and issues related to visas for Russian tourists.

According to the President, it is difficult to determine the war situation from this point forward, but Ukraine has certainly advanced, particularly towards the north east, and it is hard to see that Russia would be capable of immediate, large-scale counter measures. The President stated that more critical comments about the war have been made inside Russia, but it was too early to talk about internal disruptions within Russia. 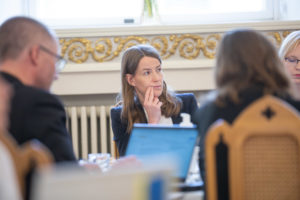 “In this, moreover, it is clear that the United States’ attention is global and that the Pacific region, in particular, is a major cause for concern. We are, if it is permitted to use an old term here, perhaps moving to a more European NATO. And there are clear signs of this.”

At the end of his opening speech, the President brought up the criteria for granting visas. “Receiving a visa to a country is not a subjective right for anyone. So when granting visas, there is always room for discretion.”

“Until now, we have considered owning real estate or an apartment in Finland to be a factor supporting the granting of a visa. I don’t think it’s necessary, but perhaps it should be clearly stated that real estate acquired in Finland after a notification date will not constitute any special positive basis for obtaining a visa. This could perhaps avoid the ownership divisions we have seen or perhaps even the real estate purchases that many have been concerned about.”