Home / President Niinistö at the 25th anniversary of Poland’s liberation

President of the Republic Sauli Niinistö attended the 25th anniversary celebrations, held in Warsaw on 3–4 June 2014, of the first free election in Poland. Celebrations began on Tuesday night with a state dinner and the presentation of the Solidarity Prize. The international Lech Wałęsa Solidarity Prize was awarded to Mustafa Dzhemilev, the leader of Crimea’s Tatar community.

The actual ceremony took place in front of the Royal Castle in Warsaw on Wednesday 4 June – exactly 25 years after the Solidarity party’s election victory, which is now considered the beginning of the end of communism in Europe.

The celebration was attended by representatives from dozens of countries, such as the presidents of the United States, Germany, France, Austria and Estonia.

Niinistö and Poroshenko discussed the crisis in Ukraine

The main topics of these discussions were the crisis in Ukraine and its potential solutions. Niinistö and Poroshenko also discussed the European Union’s policy of imposing sanctions, and the relationship between Ukraine and the EU. Mr Poroshenko thanked Finland for the support it has shown to Ukraine. He also stated that Russia must recognise the results of the Ukrainian presidential elections.  Mr Niinistö congratulated President-elect Poroshenko and remarked that the election had been well-organised. President Niinistö also repeated that, as a member of the EU, Finland will make every effort to ensure that the Ukraine crisis is resolved. 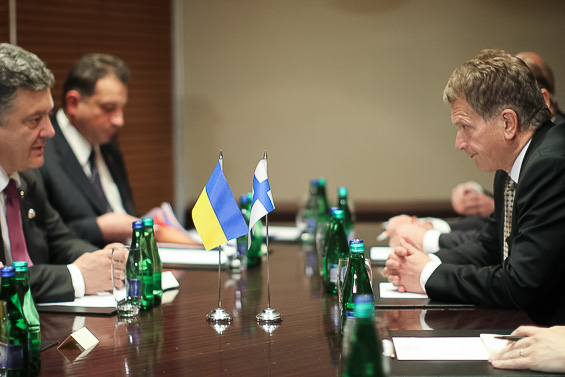