Home / President Niinistö at the closing of the electoral period: Finland has followed a clear and consistent policy

The lean years of the economy and national security were at the forefront of the speech given by President of the Republic to Parliament at the closing of the electoral period at Finlandia Hall on 14 April. The President noted that the past four years have been like dragging a stone-laden sledge uphill, with more stones being added all the time: problems in the Eurozone, ever-weakening economic prospects and the Ukrainian crisis.

We may not have reached the top of the hill yet, but we have also not crashed back down, and we will not crash. “Crashes have been avoided by sticking together,” said President Niinistö and recalled the previous recession in the 1990s: “The important thing back then was the will to cope with it. No one even said it out loud, it was just mutually understood”, the President sais. “[W]e had a mission, a great task, and one undertook to fulfil it – less with publicity, more with practical effort – and perhaps eventually achieved something.”

The Arab Spring has degenerated into a cluster of dangerous conflicts on Europe’s southern borders, and the Ukrainian crisis and Russia’s actions have destabilised the security of the eastern fringes of Europe. “Thousands of people have been killed, the stability of security policy has been compromised, and key principles of international law have been violated. At the same time, relations between Russia and the West have soured in a way not seen since the days of the Cold War,” said the President.

“Russia is a superpower that will remain our neighbour, and we will remain Russia’s neighbour. In geographical terms, one cannot choose one’s neighbours, and so neighbourhood relations must be taken care of for better or for worse,” said the President. “However, it would not be in anyone’s interests – least of all our own – for us to deliberately undermine our mutual relations.”

“Recent events have also reminded us that national security requires a wide range of readiness and risk management. This includes, amongst other things, up-to-date intelligence capabilities and legislation to back them up. ”

Close international cooperation will continue to be an essential part of our security and defence policy. Finland should participate in this cooperation on our own terms, without excluding any of our options.

“Foreign policy will continue to be at the forefront of ensuring Finland’s national security, but a credible national defence is its vital ally. ”

President Niinistö noted that the working practices and debate culture in Parliament have improved, which indicates that Members of Parliament have an appreciation of their work and position.

President Niinistö considered the constitutional amendment that entered into force in 2012 to have been a great achievement: it specified that in case of a disagreement between the President and the Government – however theoretical such a situation may be – Parliament would be the final arbiter. “I feel that I have a kind of informal parliamentary legitimacy in my office and that I feel supported and empowered by it.  I would further like to say that I particularly appreciate my cooperation with the Foreign Affairs and Defence Committees, involving a direct, confidential and informal exchange of opinions. This is exactly what we need in times like this.” 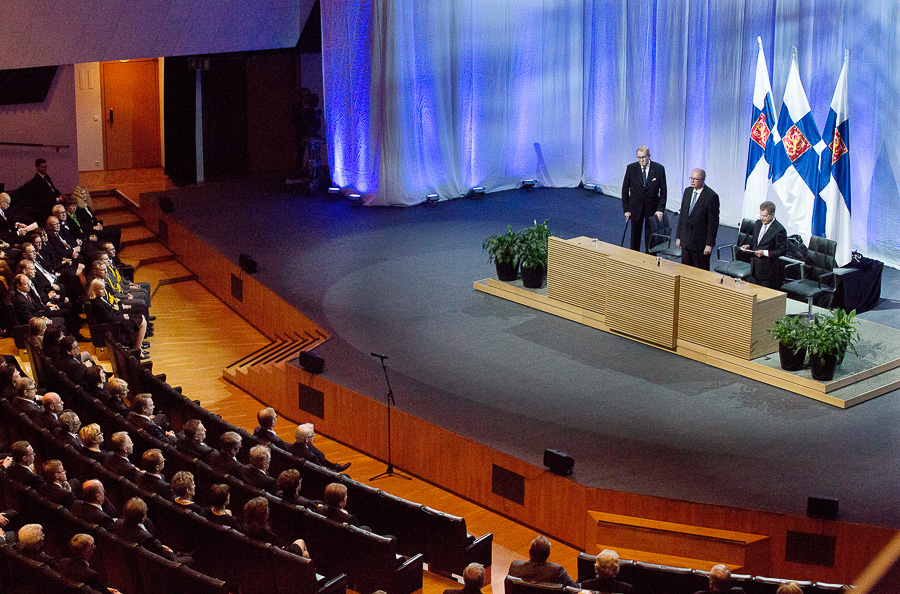