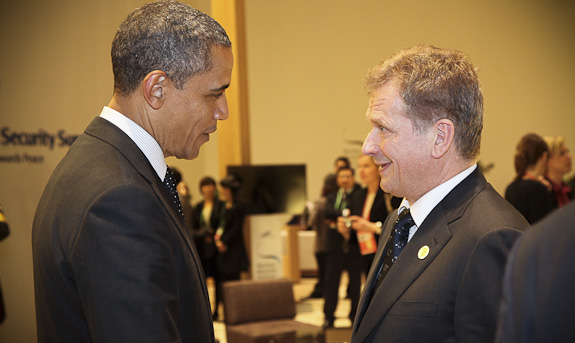 President of the Republic Sauli Niinistö attended the international Nuclear Security Summit in Seoul, South Korea on 26–27 March 2012. The summit concluded with a Communiqué where the participants committed to strengthening national action and international co-operation to improve nuclear security, to prevent nuclear terrorism and to safeguard nuclear materials.

In his speech at the summit, President Niinistö emphasised the role of the International Atomic Energy Association (IAEA). He said that IAEA peer review is a highly useful tool for improving transparency and international nuclear security. He also described a portable radiation detection and analysis system developed in Finland.

The summit was attended by representatives of about 50 countries and international organisations. It followed on from a summit held in Washington DC two years ago at the initiative of US President Barack Obama. The next summit will be held in the Netherlands two years from now. 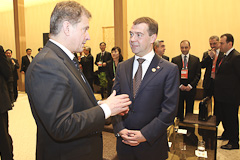 On the first day of the summit, before the working dinner, President Niinistö met a number of delegates, including US President Barack Obama. The two presidents discussed the economic situation in Finland and Europe.

“President Obama seemed to be very well informed of Finland’s situation and compared it to the rest of Europe,” said President Niinistö after the meeting.

Strengths of Finland and South Korea

Before the summit, President Niinistö attended a seminar on economic relations between Finland and South Korea in Seoul on Monday 26 March, with representatives of business sectors and corporate management from both countries.

President Niinistö noted that Finland cannot compete with quantity, only with quality. “We need a high level of expertise – and expertise is generated through investment in education, research and development, and in innovation. South Korea relies very much on these same assets. For example, the OECD PISA surveys show that the quality of education in both countries has been ranked high,” said President Niinistö in the speech he gave at the seminar. 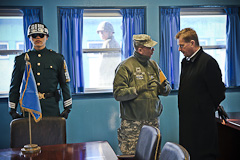 President Niinistö viewing the negotiation room, which is located squarely on the border between South and North Korea. North Korean soldiers observe from the other side of the window.
Copyright © Office of the President of the Republic of Finland

President Niinistö also recommended taking a closer look at Finland as a target for investment. “Many Asian companies have already discovered Finland, including in particular the South Korean marine industry, which is a prime example of investment in Finland.

“Green technology is another area where I believe that there is great potential and a common interest between our two countries. Given the global challenges, economic growth in the future must be based on energy-efficient and environmentally sustainable production.”

Before the beginning of the official programme, President Niinistö visited Panmunjom on the border between South and North Korea, where negotiations between the two countries have been conducted. The border zone, set up after the Korean War in 1953, is the most heavily guarded in the world.

The summit in Seoul was President Niinistö’s first trip abroad after taking office. He will return to Finland on Wednesday 28 March.