Home / President Niinistö at the Opening of Parliament: Parliament faces a demanding task 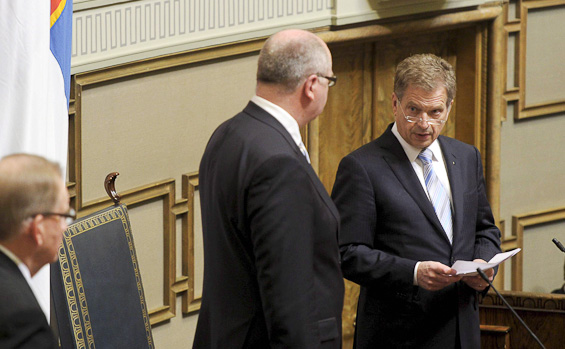 Finnish democracy and the integrity of the Finnish society are monumental values, President of the Republic Sauli Niinistö said at the Opening of Parliament on 5 February 2013. “They are not sculpted from sameness, but out of respect for the humanity and thoughts of others. We can demand understanding for these principles from those from other lands or those who think differently, once we follow them ourselves. If any individual in a democracy pursues his affairs through the use of violence, in word or deed, it is violence against all.”

Our amended Constitution permeates co-operation as well as parliamentarism, and has functioned well. “It has been a relief, at least for me, to observe that no lexical analysis has been necessary, let alone lawyers – issues have simply been dealt with, and in an atmosphere of mutual understanding.”

According to President Niinistö, in spring, Parliament will be faced with a demanding task. “Much has been said about the economy, debt and the sustainability deficit; now we are left to await the measures the Government and Parliament will take”, he said and reminded that economic challenges have been overcome in the past. “Times change, and so do the problems and the need for action. What remains, however, is the necessity for a will to do what the task demands, no matter what. This is now expected of you, because this cannot be left undone.” 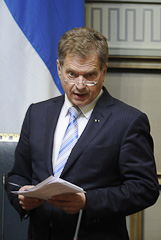 Parliament will soon begin handling the security and defence policy report. For President Niinistö, the key questions boil down to just two: in how we assess the development of the global situation; and in how to make our resources last so as to maintain our key defence principles of compulsory military service, defence of the entire country, and military non-alliance.

According to the President, there is a need to continue foreign policy discussions even in between reports. “My idea is to organize a recurring foreign policy reflection session, where I would hope for the participation of Parliament and several other interested parties. I freely admit to having borrowed the idea from a next-door neighbour.”

Nexus between Europe and Russia

President Niinistö noted that Finnish democracy, the judicial system and the way we live all originated from Europe. The same is the case with the other Nordic countries. A new world order is certainly best to encounter as part of a larger community. “Let Europe be our community.”

Finland has an important field of work with regard to the EU’s external relations. It is the nexus between Europe and Russia, where there is much improvement to be made. Finland’s initiative in the Northern Dimension Partnership Programme was a success, and it is good that the momentum has since been maintained. Its success can be measured in concrete terms, with the progress made regarding the Baltic Sea.

According to President Niinistö, Progress in creating international co-operation for combating climate change is painfully slow. “The financial crisis and its unheeded calls for increased consumption was frankly a psychological step backward”, he said. “A change over to renewable energy and advanced emission cleaning technology would constitute a significant model for the entire world. Finland’s voice in combating climate change can also be heard through visible expertise, where we punch above our weight.”