Home / President Niinistö at the opening of Parliament: The key issue is continuing to cherish democracy 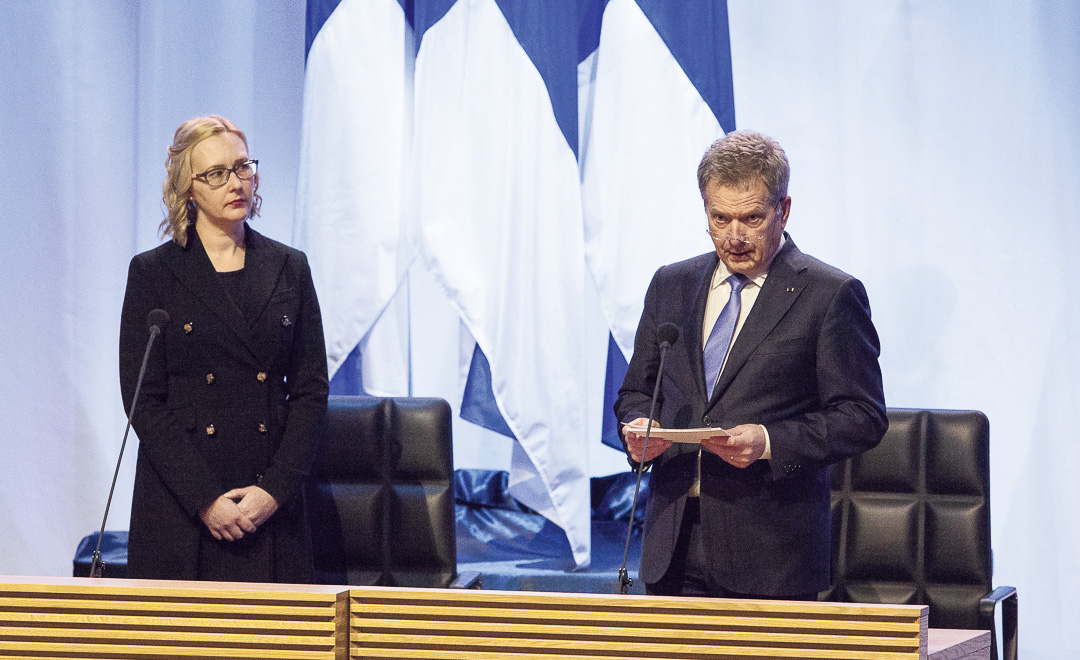 “The key issue is that we continue our great tradition in domestic policy, of cherishing democracy,” said President of the Republic Sauli Niinistö during the opening of Parliament on 2 February.

“We, the representatives of the people, need to remain cool-headed and – at times – be patient and remember the big picture.  We need to show that we appreciate what we do, but that we also respect the efforts of those who disagree with us. This will send out a signal of stability to our fellow Finns,” said the President.

No major movements inside Finland are seeking to challenge our democratic system. However, the President commented that we have much to learn with respect to the social and real-time media.

In his speech, the President returned to the first decades of our period of independence, when Finland was still being forged as a nation in many regards. Even the deepest political conflicts were solved by democratic means – “even if this ultimately involves chastising your own side.”

Domestic policy is dominated by the economy “now, as at almost any other time,” said the President. During the period of economic growth and greater wellbeing following the mid-1990s, Finland became “complacent and set in its ways.” When the financial crisis occurred, it was believed that growth would soon resume. “Living on credit began to be the new normal.”

The President stated that there are no easy solutions to this situation and the measures being taken are generating both criticism and commotion. “But I would encourage you to forge ahead; since we cannot afford to do nothing.”

The President pointed out that globalisation has increased well-being here and elsewhere, but has also deepened inequality. A possible rise in protectionism would be paradoxical, since the challenge would no longer lie in competitiveness, but having the opportunity to benefit from it.

“The closure of economic or other borders is not a cure for the imbalances of globalisation. No nation can flourish by forgetting the rest. The direction should be towards open cooperation based on international rules,” said the President.

Economic power has become more concentrated as globalisation has progressed: “A very small number of people can fundamentally affect the circumstances of very large masses.”

“I consider it important for Finland to combat inequality,” the President added. “In addition to public sector activities, each and every Finn has the duty to help those who are in need; to encourage those who need encouragement; but also to prod those who choose to be inactive. And we must all give a clear message to greed: No.”

“In my New Year’s speech, I made the point that the EU must speak out on geopolitical matters – it has now become clear that the voice of Europe is also much needed in championing western values,” emphasised the President in his speech.

He stated that Finland is without doubt part of the West and a land of western traditions. “Our existence is based on the values of democracy, human rights and equality. These are also the foundations of our foreign policy.” The realignment of the West is providing food for thought at the moment. The President posed the question of what currently constitutes the West. “From Finland, the sun traces an arc westwards to the land of Brexit, and onwards to Trump Tower.”

“Our security policy can have only one objective – how best to ensure a secure life for Finnish people,” said the President, before going on to say that no threat is posed by the peaceful Nordic region, but we must always prepare for unrest originating elsewhere.

Security must be built in every way

Finland should engage in building its security in all places and in all ways: in both small and larger steps. In his speech, President Niinistö updated Finland’s four security policy pillars, which include national defence and security, western integration, relations with Russia and the international system.  “They are not static, but develop over time.”

“Evil will meet with stiff resistance if it comes here,” said President Niinistö, when describing the national pillar. “Finland will be a strong partner if a crisis occurs.”

The President commented that security policy cooperation with Sweden had gone well. “Where applicable, the same cooperation could occur alongside the other Nordic countries. The EU has also woken up to the need of protecting itself, something which we in Finland have long advocated.  We have been at the heart of a NATO Summit for the first time, which sends a strong signal. We are building on a long-standing relationship with the United States, which has yielded results in areas including arms sales and beyond.”

The President said that there were no bilateral problems in Finland’s relations with Russia. “And we have no interest in creating such problems. They respond to our invitations as do we to theirs, talking very frankly, as good neighbours tend to do.  We know each other very well.”

President Niinistö stated that the rules-based international order built around the UN is, on the other hand, encountering problems: “Will a few big fish cruise past the hundreds of minnows?  We are on the side of the little fish, but not against the big ones. An effective and just international order is ultimately in everyone’s interests..”

”You are the custodians of great things,” President Niinistö told the members of Parliament. “This year, Finland will celebrate 100-years anniversary of its independence as one of the world’s most stable democracies. Rule by the people is a key factor in this success story, since its deep roots in the Finnish mentality have brought us this far.  Our democratic principles have also been skilfully applied; as you are doing in your turn.”