Home / President Niinistö at the opening of the National Defence Course: A new type of Cold War threatens to transform our international environment for a long time to come 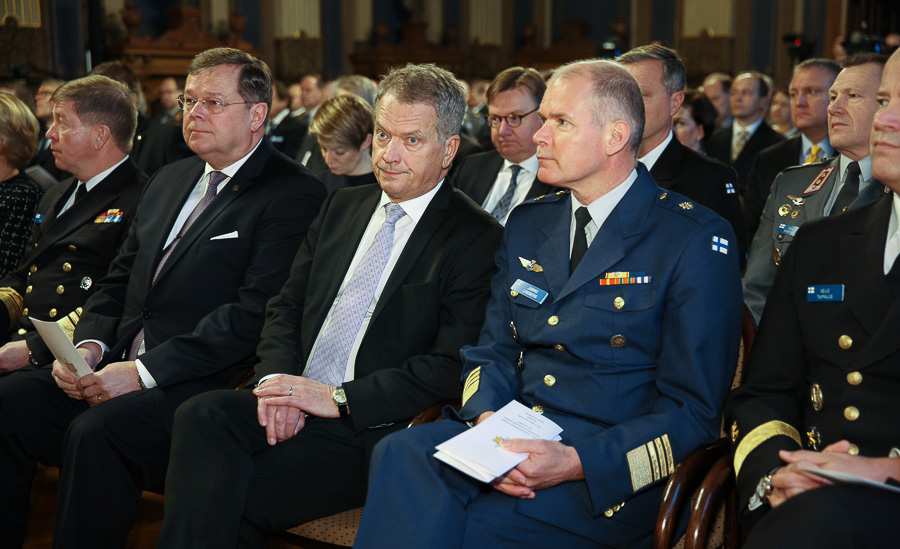 According to President of the Republic Sauli Niinistö, due to the Ukraine crisis relations between Russia and the West are at their most tense since the Cold War. “This new type of Cold War is a serious development which threatens to render our international environment more precarious over the long term. Although this is no longer entirely avoidable, it may still be possible to alleviate the situation to some extent. Since, in the face of such a development we have nothing to gain, it is worth making a major effort to improve matters,” stated the President upon opening the 211th National Defence Course at the House of the Estates on 10th November 2014.

President Niinistö pointed out that Finns would also be affected by the impact on Europe’s security policy environment. “The general increase in tension can also be seen in the Baltic region, our neighbouring area. So far, this is more a question of the effects of the crisis rippling out into the Baltic region, rather than of the area becoming unstable itself. However, quite understandably, even this is being viewed as a cause for concern, since an active military presence in our neighbouring region – which was still an everyday fact of life in the 1980s – seemed to have become a thing of the past,” commented the President.

President Niinistö added that, while it is important to note changes during the phase in which they occur, attention should also focus on issues that seem to be remaining constant. “Distinguishing what is changing from what is remaining the same, and weighing these up, are key tasks of foreign and security policy. After all, mistakes in this sense can be expensive or, in the worst case scenario, impossible to rectify.” 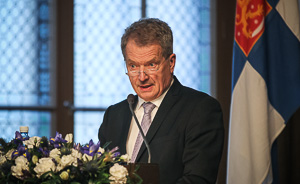 “There is a Russian proverb which says: ’kazak berjot što ploha ležit’ or ’A Cossack will take whatever is not fixed to the ground’. It is worth taking heed of this household wisdom, which is doubtless based on experience. We must take care of issues and actively cherish the things we view as important. Failure to do so will have consequences. This is true of all aspects of life, from security to the economy.”

President Niinistö reminded his audience that Finland has aimed to build its security holistically, which has meant maintaining a focus on each element and the balance between them. “These elements have included close involvement with international cooperation, as a member of the EU as well as in building separate partnerships with Sweden, the Nordic countries and NATO. Overall security also involves fostering good relations with our neighbours and the maintenance of a credible defence, built within the context of the circumstances in which we find ourselves. Of course, our security also includes a broader, worldwide dimension, in which we strive to maintain international justice and meet the challenges facing humanity as a whole, at the level of the UN for example.”

President Niinistö also views the credibility of a national defence as being dependent on a number of factors such as intent, military technology and tactics. A balance must also be struck in this respect. “While it is true that we Finns have the will to defend ourselves, the question remains as to whether we have the money. Based on our current expenditure, the economy threatens to become our Achilles heel. Due to economic developments, at one and the same time we are under pressure to cut public expenditure and increase our defence spending. On the other hand, we have achieved a far-reaching consensus that we need to secure the defence capabilities of the Defence Forces – and the required development projects,” stated President Niinistö.