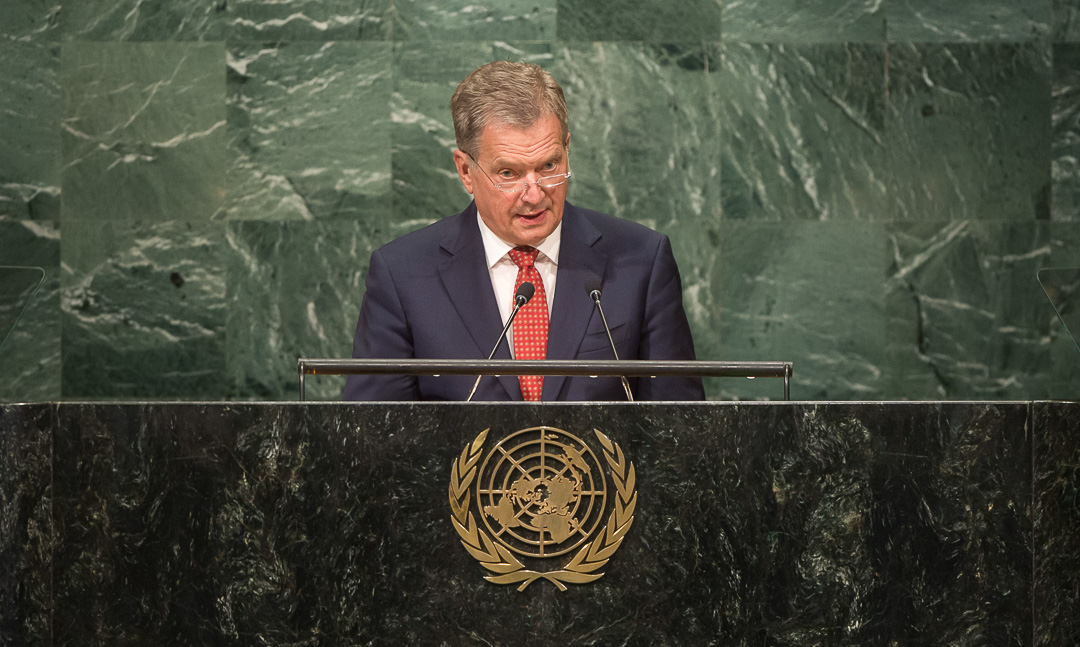 “The conflicts we are facing now require urgent humanitarian action. Yet the underlying causes are long-term. Economic, social and political progress is imperative. The international community can and must assist,” said President of the Republic Sauli Niinistö in Finland’s national statement at the UN General Assembly in New York on 21 September.

President Niinistö pointed out that, unfortunately, international peace and security are under threat everywhere: “Narrow-minded nationalism, racism and violent extremism are on the rise. We must battle these destructive ideologies.”

President Niinistö’s speech continued on the theme of refugees and migrants. This theme has been one of the week’s main focuses at the General Assembly. The President said that uncontrolled migration is a serious problem. Every day, tens of thousands of people are forced to leave their homes, for example due to conflicts and natural disasters. The conflicts in Iraq and Syria are among those having a strong impact on Europe.

The causes of migration must be solved

President Niinistö stated that Europe is under enormous pressure. While European societies are compassionate towards those fleeing conflict, there are limits to Europe’s ability to help asylum seekers. The President stressed the importance of international cooperation in controlling borders.

“We have to work together to find sustainable solutions at global and regional levels to better control  borders while safeguarding the rights of those seeking international protection on the basis of a well-founded fear of persecution,” the President stressed.

The President emphasised that the causes of migration must be resolved. Humanitarian aid is not sufficient to solve the problem.

“The European Union and Finland as a Member State will continue to do their share, but it will never be enough. Humanitarian action will never compensate for the inability to address the root causes of forced migration,” the President added.

President Niinistö underlined the importance of solving such problems. If this is not done, the limits facing destination countries may prevent help from being given to those who genuinely need it.

The UN has an important role to play in preventing conflicts

The President highlighted the importance of the UN in conflict prevention, negotiations and peacekeeping operations. Finland supports the efforts of the UN. However, the President insisted that final responsibility for the development of societies lies with individual nations and their governments.

“The UN is the embodiment and the arbiter of the rule-based international system of sovereign states. It is the only truly global body that we have. But we must work together to ensure that it functions better to fulfil its many tasks,” President Niinistö said.

The President also referred to the 2030 Agenda for Sustainable Development, the implementation of the Paris Agreement on Climate Change and the participation of women: “Gender equality and the political, economic and social empowerment of girls and women are key drivers in sustainable development and in combating climate change.”

President Niinistö ended his speech by promising his support for the incoming UN Secretary-General. He expressed his delight that several women were among the candidates. The President hoped that the Secretary-General would engage in stronger cooperation with the UN Security Council and enhance the activities of the UN as an organisation.