Home / President Niinistö at the UN: We must show that we do care 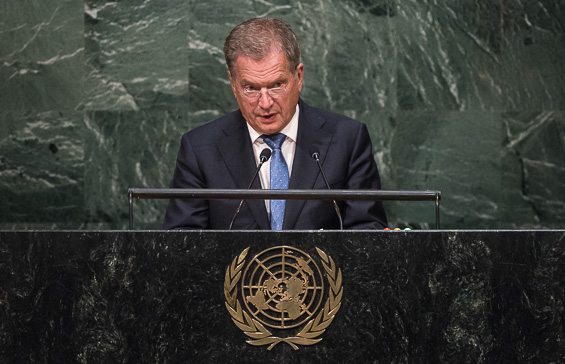 “The international community must now show that we do care. Especially the UN Security Council and the countries in the region, must work together on finding a political solution to the crisis in Syria”, President of the Republic of Finland Sauli Niinistö said at the UN General Assembly in New York on 29 September.

We are facing an extremely dangerous crisis in Syria, Iraq and parts of North-Africa, the President said. “We are also witnessing an unprecedented humanitarian catastrophe unlike any other since the Second World War. ISIL and its horrendous terror is a direct by-product of the conflicts in Syria and Iraq. It threatens the peace and stability in Middle East, in Africa and even in Europe.”

60 years ago Finland joined a family of countries which do care and shoulder their responsibility, President Niinistö said that Finnish people felt this caring when  national composer Jean Sibelius passed away in 1957. “The UN General Assembly decided to honor him with a moment of silence. The Chairman of that Assembly, Mr. Leslie Munro, described how ‘Sibelius belonged to the whole world’. We also felt what shouldering responsibility means by participating in the first UN peacekeeping operation in Suez.”

Finland will shoulder its responsibility

“The present refugee situation in the Middle East, in many parts of Africa, and in the Mediterranean is unbearable for all”, President Niinistö said. “Although the neighbouring countries bear the heaviest burden, the refugee crisis is causing serious political tension in Europe. Finland is also receiving proportionally a very high number of asylum seekers. Not helping is not an option for us. But we have to find more effective and sustainable ways to help those in need.

President Niinistö emphasized that there many other ongoing conflicts over the world. “The UN peace operations are at the very heart of its efforts to maintain international peace and security”, he said. “[P]olitical solutions must always guide the deployment of UN peace operations. The UN’s prevention and mediation capacities must be strengthened and sufficiently funded.”

“Since the beginning of its membership, Finland has contributed 50 000 men and women to UN peacekeeping operations. In per capita terms we are number two contributor in Europe. And we will further strengthen our contribution. We will shoulder our responsibility.”

According to President Niinistö, the new Agenda 2030, adopted at the UN Sustainable Development Summit, shows that  we are on the right track. “For the very first time we have a real program for sustainable development, binding all Member States.”

“Now it is up to us to implement this ambitious Agenda. I urge the United Nations to show its convening power again. It is necessary to get everybody on board to make the commitments a reality. The private sector and the civil society are in a key position to take the Agenda forward, together with Governments. Even individual persons have a role to play.”