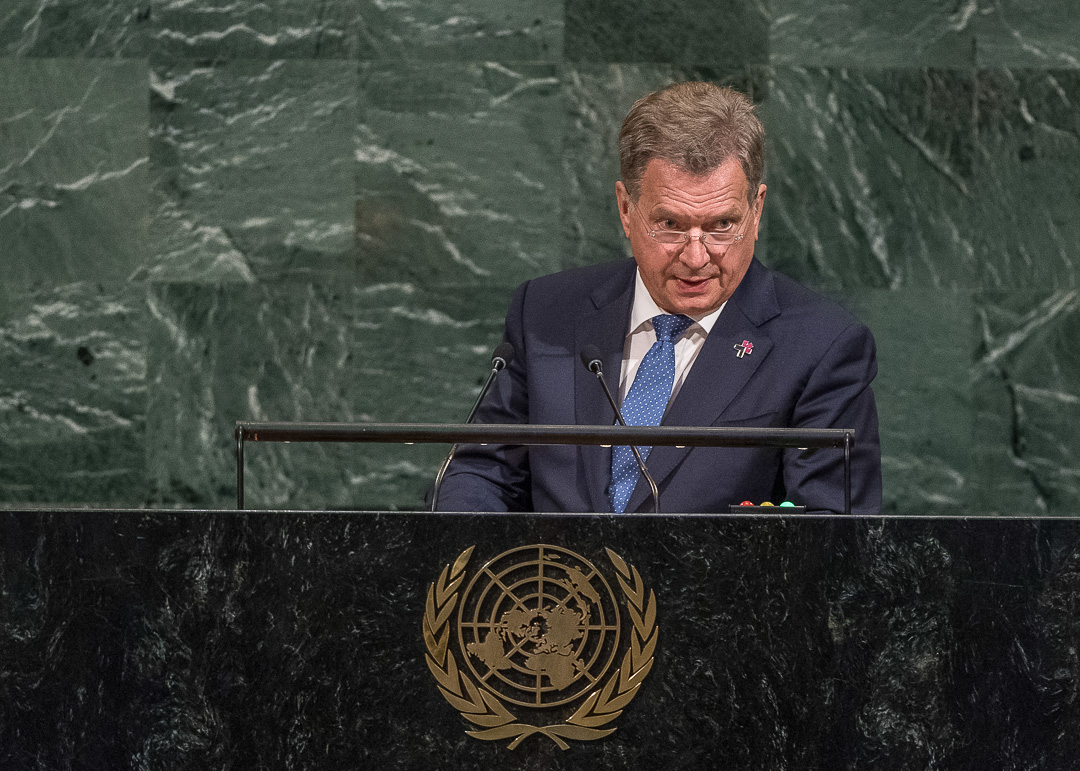 “North Korean nuclear weapons programme is a threat to global peace, and it must be stopped”, President of the Republic of Finland Sauli Niinistö said at the UN General Assembly on 20 September 2017.

“Such behaviour can’t be tolerated. Finland, as part of the European Union, stands firmly behind the sanctions and calls on others to do the same. A solution can only be sought through negotiations and the North Korean government must participate without preconditions.”

According to the President, concrete actions on behalf of disarmament have to be started immediatedly. Finland’s approach to nuclear disarmament is result-oriented and pragmatic. “It is imperative that the countries possessing nuclear weapons are on board on any negotiations. I call on all nuclear weapon states and countries possessing these weapons to promptly take concrete actions in nuclear disarmament.” The President was hopeful that the recent talks on strategic stability between the United States and the Russia will help to restart the arms control talks.

Women, children and young people must be heard in peace processes

President Niinistö welcomed Secretary-General António Guterres’ determination in reforming the UN and his focus on conflict prevention. “Finland continues to advocate the use of mediation in conflict resolution. Mediation efforts, when successful, prevent conflicts and decrease human suffering.”

Women, children and young people often pay the highest price in conflicts. The President emphasised that they must be given a voice in peace processes. “Finland has contributed to the establishment of a Nordic network of women mediators. It aims at sustaining peace through the inclusive and meaningful participation of women in all phases of peace processes.”

Pandemics are a serious risk

Along with nuclear weapons, the President pointed out other global risks as terrorism and pandemics. President Niinistö said that he is looking forward to the leadership by the new UN Office of Counter-Terrorism.

Diseases travel across borders rapidly and synthetic biology is an emerging threat. “Better prevention and national preparedness is called for. We need global multi-partner collaboration”, the President said. “Finland and Australia are also co-chairing an Alliance supporting health security capacity building. We need to take action before the next pandemic arrives.”

President Niinistö noted that gender equality is a key priority in the Finnish foreign policy. “As a HeForShe IMPACT Champion I attach also high personal importance to this. Universal access to sexual and reproductive health, sexual rights and comprehensive sexuality education is a key factor in sustainable development.”

He also pointed that no UN peacekeeper nor any other UN personnel should be associated with misconduct of any shape or form. “There must be zero tolerance with regard to sexual exploitation and abuse.”

“Climate change binds together the south and the north”, President Niinistö said. He emphasised the rapid implementation of the Paris agreement, which has a clear goal: limiting the temperature rise well below two degrees.

The window to act is closing and the Arctic is at the forefront of climate change. “[The Arctic] is warming twice as fast as the rest of the world. If we lose the Arctic, we will lose the whole world.”

According to the President, the reduction of emissions and impacts of black carbon and methane in the Arctic would be a genuine win-win  - what we need is a common will. “The sources of black carbon are known and solutions exist.”

The theme of Finland’s Centennial is “Together”, the President said in the end of his statement.  Since the beginning of our independence, Finland has supported and respected the rules-based international order. “I strongly believe that global challenges and threats must be addressed together by the world community, not only by individual action. Peace and security, human rights and development belong to all of us. Only together can we make this world a better place.”