Home / President Niinistö at the World Economic Forum in Davos 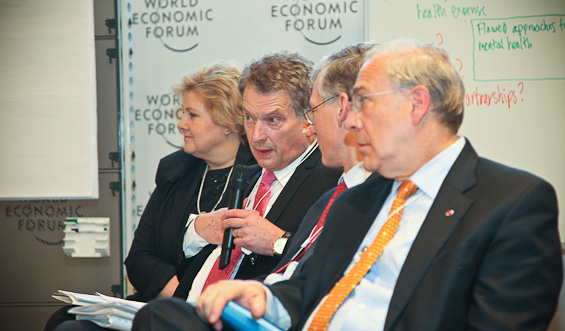 President Sauli Niinistö informs participants about the North Karelia Project at the session on health and the economy. Left to right: Erna Solberg (Prime Minister of Norway), President Niinistö, Frans van Houten (CEO of Philips) and Angel Gurria, Secretary General of the OECD;Copyright © Office of the President of the Republic

President of the Republic Sauli Niinistö attended the World Economic Forum (WEF) Annual Meeting in Davos, Switzerland on 23-24 January 2014. Over 2,500 participants attended, including more than 40 heads of state or government, a host of other political decision-makers and a large group of economic opinion-formers, researchers and representatives of international organisations.

President Niinistö participated in Friday’s sessions on competition and innovations, the global outlook for 2014, and health and economic growth. While speaking on competitiveness, the President emphasised the need for structural change. He also drew attention to the exchange value of the euro; he believes that a high euro is having a major impact on Europe’s competitiveness. Speaking further on the economy, President Niinistö recommended investment in sectors of the future such as biotechnology, nanotechnology and cleantech. In his statement he also underlined the difficulties now coming to a head in leadership at global level. “The world lacks such leadership and no solutions are emerging to vital issues,” stated President Niinistö.

In the discussion on health and economic growth, President Niinistö pointed to the North Karelia project as an example of how various social actors can be harnessed into achieving goals through cooperation. He reminded his audience that health aspects now form part of almost all economic activity: governments also need to be able to cooperate with the business world in sectors not directly related to healthcare but which nevertheless have an impact on it.

The sessions and panel discussions held during the four-day forum explored the changes under way around the world and their effects on many aspects of society, politics and the economy. Themes covered issues such as innovations, economic growth, public expectations, health, population growth, the emerging economies and youth unemployment.