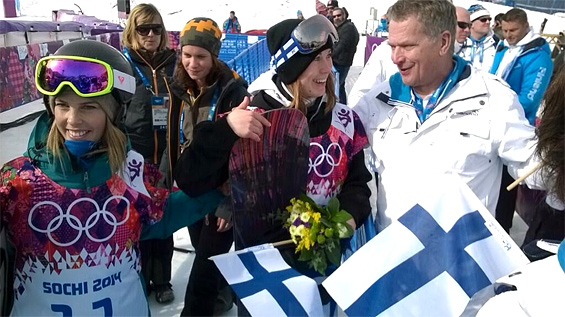 President of the Republic Saul Niinistö and Mrs Jenni Haukio watched the Winter Olympic Games in Sochi from 6 to 12 February.

The President followed the fortunes of Finnish athletes in various events such as snowboarding, ice hockey, skiing, the biathlon and speed skating. In addition, the presidential couple met athletes at the Olympic Village to give them their support.

On Monday, 10 February the Finnish Embassy and the Finnish Olympic Committee organised a joint reception in Sochi. In his speech at the event President Niinistö commended Team Finland for their great spirit and their supportive attitude towards their competitors. Snowboarder Enni Rukajärvi’s silver medal was celebrated with coffee and cake at the reception. Rukajärvi won the silver medal in Ladies’ Slopestyle on Sunday. The President was at the venue to congratulate the medallist.

The Opening Ceremony of the Olympic Games was in the programme of Friday, 7 February. During his stay in Sochi, President Niinistö also took part in the reception of the International Olympic Committee with numerous heads of state and sportspeople.