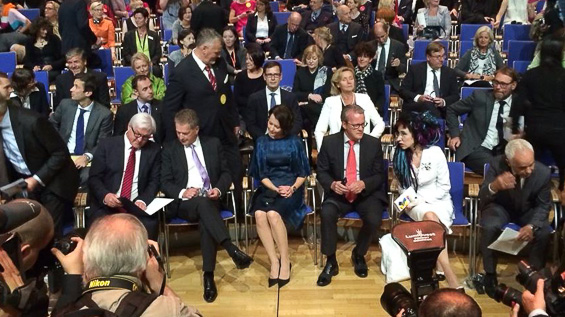 On 6–8 October, President of the Republic Sauli Niinistö and his spouse Mrs Jenni Haukio visited the Frankfurt Book Fair. Meetings with German political and economic leaders were also form part of the President’s programme.

Finland was this year’s theme country at the Frankfurt Book Fair, which is the world’s largest event in the book trade. President Niinistö spoke at the Fair’s opening ceremony on Tuesday 7 October.  The Presidents spouse, Mrs Jenni Haukio, also attended the Fair and conveyd her greetings at a Finnish tango evening and a seminar for translators of Finnish literature. The presidential couple participated in the opening ceremony of the Finnish theme pavilion Finnland. Cool.

Alongside his involvement in the Book Fair’s programme, while in Frankfurt President Niinistö met Joachim Gauck, the Federal President of Germany; Frank-Walter Steinmeier, the German Minister of Foreign Affairs; and Peter Feldmann, the Mayor of Frankfurt. The German and Finnish presidential couples also visited the Fair together.

In addition, President Niinistö met Mario Draghi, President of the European Central Bank, and made a speech at a seminar on economic relations between Finland and Germany.