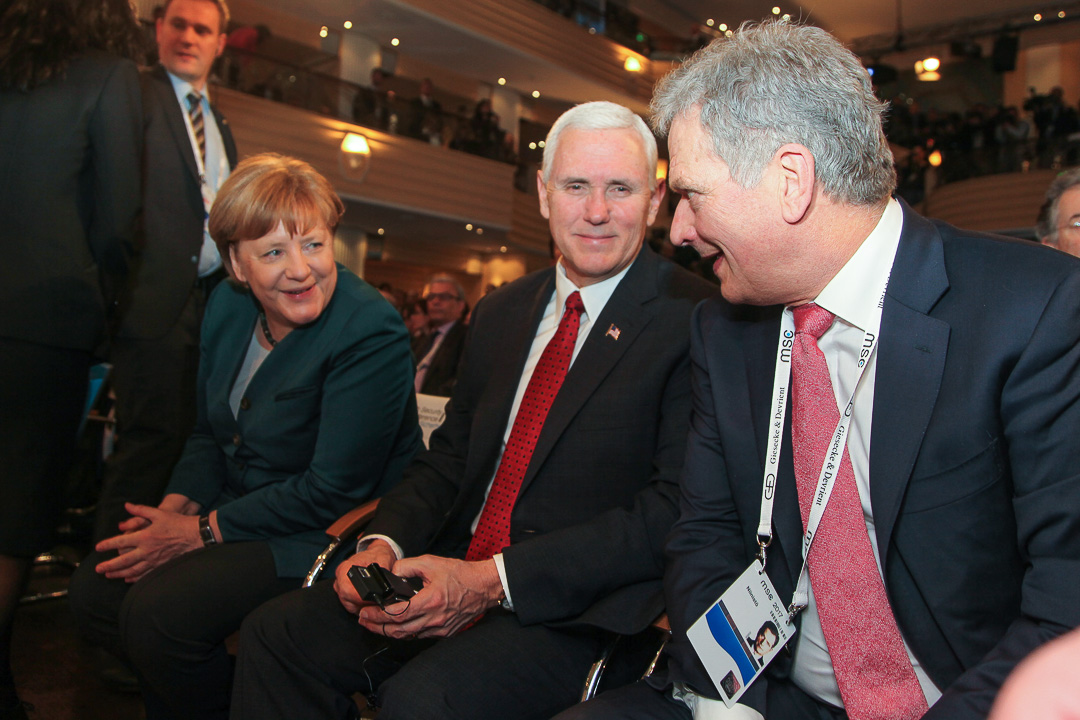 President of the Republic Sauli Niinistö attended the Munich Security Conference on 17-18 February 2017. The President was involved in a number of bilateral meetings during the conference. He also participated in a panel discussion on climate change and security. The particular focus areas of the conference were the future of the EU, transatlantic relations and the international system.

The President participated in a panel discussing climate change on Saturday afternoon: “This was an important discussion because here, in Munich, climate change and environmental issues were considered for the first time alongside their link to security, and that is significant,” said President Niinistö.

The President underlined that international commitments must be adhered to with regard to climate change too: “There has been much discussion of honouring commitments here. Quite rightly, NATO countries have been urged to fulfil their two-percent commitment, but it would also be consistent to honour the Paris agreement. On the whole, I think it is important that the international legal system and international agreements are fully honoured with respect to security issues – including those related to climate change. We can only manage these together – there is no room for free-riders,” the President told the press after the panel discussion.

During the panel discussion, President Niinistö focused on the impact of climate change on the Arctic region in particular, The impacts of climate change are most apparent there: “However, the most severe effects are global. A rise in sea levels due to the melting of the ice caps will be seen everywhere. The consequences will be catastrophic,” said President Niinistö.

President Niinistö also pointed out that climate change is a major ethical issue: “If we allow the worst to happen, it will not affect those on the panel or the audience, but the fates of their children and grandchildren, which makes this a great ethical issue.”

The other participants in the panel were Prime Minister of Bangladesh Sheikh Hasina; Swedish Minister for Foreign Affairs Margot Wallstrom; US Senator Sheldon Whitehouse, and former President of Ireland Mary Robinson The discussion was held under the heading, “Climate Security: Good COP, Bad Cops”. The COP, or Conference of the Parties, is the supreme decision-making body of the UN Convention on Climate Change. COP meetings have been held every year since 1995.

Greetings for the Finnish Defence Forces

During the Munich Security Conference, President Niinistö conversed with figures such as James Mattis, the new US Secretary of Defense. On Friday evening, after his meeting with Defense Secretary Mattis, President Niinistö said that he warmly welcomed everything Mr Mattis had said: “We went through certain basic issues concerning Finland’s security. I tried to provide him with a succinct explanation of them. He was clearly quite knowledgeable of issues related to Finland.” The President also passed on Mr Mattis’s greetings to the Finnish Defence Forces: “He views them as a tough player.”

President Niinistö also had a bilateral meeting with Jens Stoltenberg, the Secretary General of NATO. The President’s discussion with Mr Stoltenberg concerned flight safety in particular.

Speech in honour of Joachim Gauck, Federal President of Germany

On Saturday evening, President Niinistö gave a speech in honour of Federal President of Germany Joachim Gauck at a gala dinner at which Gauck was presented with this year’s Ewald von Kleist Award.

Over 500 decision-makers and experts from around the world participated in the conference, including more than 25 heads of state. The Munich Security Conference has been held since 1963. It is an independent forum dedicated to promoting peaceful conflict resolution and international cooperation, and dialogue on dealing with current and future security challenges.