Home / President Niinistö concluded the Kultaranta talks: A secure life must be guaranteed 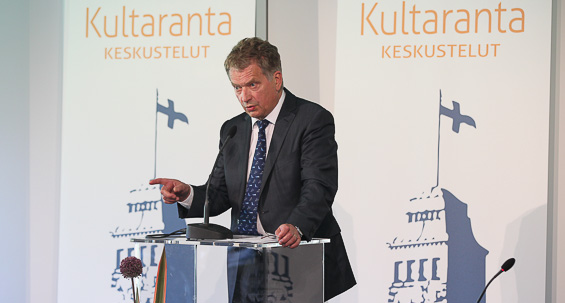 ”The security of us Finns depends to a large extent on how the security of other Finns, a secure life, has been guaranteed,” said President of the Republic Sauli Niinistö at the closing session of the Kultaranta talks on Monday 9 June. ”We should be able to guarantee that as few Finns as possible are disappointed in their lives as Finns.”

President Niinistö considered that a secure life is substantially related to security matters in addition to ”NATO talks and Russia talks.” ”Further, we should also consider the role of economy. As the only purpose of economy is to secure people’s lives,” said President Niinistö.

The themes of the talks that were concluded on Monday included Russia, cyber and information operation, national defence, and ways to renew Finland’s economy and society.

”You have made this event possible. I am truly thankful for that,” said President Niinistö.

Summary of the groups: Europe, national defence and cyber operation

At the start of the closing debate, the group moderators summarised the discussions. The group whose topic was Europe was led by Teija Tiilikainen, Director the Finnish Institute of International Affairs, who explained that the group was unanimous on the fact that the common interest and mission of the Union have become obscured to citizens and decision-makers. Nevertheless, integration is beneficial to the member states.

With regard to the common currency, it was stated that mistakes have been made, but instead of demolishing the system, it should be improved. We should learn from the mistakes.

The group on national defence discussed the change in the operating environment (the crisis in Ukraine), the resources of armed forces, and international cooperation.

The group stated unanimously that a strong national defence cannot be outsourced. European defence cooperation must not be belittled. A political community does create security even though the EU does not have military structures as such. With regard to a NATO membership, the participants felt that there is a need for a fact-based report which could handle also other elements of international cooperation. The group was moderated by Jyri Häkämies, Director General of the Confederation of Finnish Industries.

The working group on cyber and information operation was led by journalist Jarmo Mäkelä. The group agreed that Russia regards itself as being at an information war with the western civilisation as for its values. ”They use a form of fightback, where attack is the best form of defence.” On the other hand, operations are so flagrant that they do not receive any response from the public in Finland, only rejection.

There has not yet been a cyber war but there have been cyber attacks. Finland has a few exceptional strengths in a cyber world. Finland has a virus laboratory, and the level of information security is good in international comparison. There is also good cooperation and a trusting relationship between the private and public sector.

There was a variety of comments on the offerings of Kultaranta during free discussion. ”There has been a lot of talk about potential threats. We must remember that Russia is a country where the intellectual potential is infinite,” reminded journalist Anna-Lena Laurén. According to Minister for International Development Pekka Haavisto, stereotypes are dangerous, and he wished there would be more discussion on Russia through issues related to human rights and democracy.

According to Kaius Niemi, Senior Editor-in-Chief of Helsingin Sanomat, Finns take a lot of interest in the topics discussed in Kultaranta. Also young people read news related to Ukraine.

Searching for a tenacious Finland

On the afternoon, the theme of the discussions was Finland’s future under the title “Tenacious Finland – how to renew Finland’s economy and society?”.

Moderator Matti Apunen, the Director of the Finnish Business and Policy Forum EVA, started the discussion by suggesting that Finland has transferred to a period of permanent slow growth and that our country is marked by stagnation. The panellists admitted that the situation is serious, and some of the reasons that came up varied from changes in the world economy to domestic structures.

However, the panellists also saw hope in the situation. Compared to previous generations, young generation is more educated and healthier, young people have better language skills, and they emphasise fairness, said Tommi Laitio, the Director of Youth Affairs. According to journalist Saska Saarikoski, visions of the end of the world are still far away. Finland is a strong country which has tremendous powers on which to build on.

The increase in entrepreneurship was regarded as a positive factor, and people from around the world come to visit the Startup Sauna at Aalto University.

In many of the speeches, the demolition of unnecessary regulation was presented as a solution. Examples of unnecessary bureaucracy were found in authorisation-related issues, taxation as well as in the supervision of agriculture. The renewal of central government and election system was also discussed.